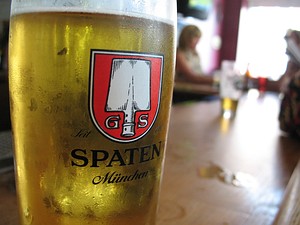 Monty's Korner was a friendly European-themed bar on East Avenue; count on a televised soccer game and live conversation.

The staff encouraged patrons to bring in food from one of the many local eateries (The Pita Pit next door was a popular choice). It was not unusual to see a well-behaved pet or two enjoying the atmosphere as well.

Smoking was allowed on the outdoor patio; patrons who smoke were generally quite good about staying out there.


2007-11-10 23:14:34   My friends in stopped in here for drinks before we went dancing. The atmosphere was so mellow and the selection of beers and spirits was really impressive. —CatMagro

2008-05-18 13:13:30   Is This a gay bar I went there on a thursday night and got hit on by some old fag who was disguisting dont think I will go back He was Creepy and friends with the bartender. —Freddie

2008-05-19 09:43:03   Freddie is an idiot. I have been frequenting this place for years and have never been hit on by another dude. Maybe Freddie puts out a certain vibe that he is unaware of.

Monty's is a cool, sort of chill respite in the middle of the East Ave din. The crowd is generally a little older and mellower than most of the bars around it. It has an (authentic) English pub feel—those of you who have been into an ordinary neighborhood bar in England will know what I mean. Huge selection of beers. —BadFish

2008-05-19 10:08:32   The jukebox at the Korner is way fun. I like to annoy my friends by blasting some Lionel Richie or paying to play the same Abba song 3 times in a row. Honestly though, they do have a great selection of music in there. Check out what they have on cask as well. —KimBee

2008-05-19 11:34:20   Amazing beer selection and low key atmosphere. A great dive bar to just chill with friends at while enjoying a good brew. They make sure to play all soccer games on the tv's when they can. —MrRochester

2008-08-15 15:24:56   I love this bar too, it has one of the best atmospheres and interior in town. I love the high ceiling and classy design. They always have great beers on tap too. For a long time, they were the only place that served the delicious Framboise Lambic(Belgian Raspberry beer, must be tasted to believe!). They also always play the major soccer, cricket, rugby, etc. matches that come on. —AlexD1234

2008-10-08 10:14:57   I love this bar but after speaking with friends and the management last night, there is a very real an imminent possibility this bar will close very soon. Stop an and patronize the best bar in East End before they close and ask if there is anything you can do to help. —BadFish

2008-11-12 20:27:18   Went here Monday night. Used to go every Monday night after trivia at The Old Toad, but with a wife and kids, those opportunities are few and far between! Still a great beer selection and fantastic prices. I wish they still had pretzels and mustard, but otherwise I love this bar. We had a Scotchtoberfest there a few years ago - made a haggis, cock-a-leekie soup, and some other scotch food, along with some tasty single malts... something else this bar usually excels at. In an area where bars come and go, it's been fantastic having the stability of Monty's for the past several years. —DavidGottfried

2009-04-26 21:29:47   A good alternative to the rest of the east/alexander scene. Quite good beer selection. Mellow and friendly crowd. They have a little outdoor patio area right on the sidewalk, which is cool in the summer/spring. Sometimes, the service is slow. —bjnlbn

2009-11-16 12:06:44   This bar offers little in the way of flash, especially compared to its new neighbor across the street, but it's an an excellent middle ground in the East End. I've referred to it more as "a room you drink in," and I mean that in a positive way. The service has always been average to above average, there's a good selection of beer, and the local d-bags tend to shirk its doors in favor of terrible clubs with overpriced drinks. —MarkNewell