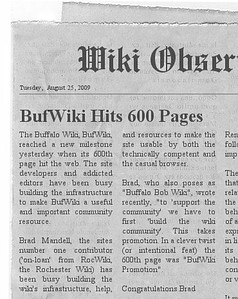 Buffalo is the furthest west in the chain of cities across Western and Central New York. It is New York's second largest city (with Rochester a close third), and suffers many of the same problems as Rochester while continuing its conversion from a blue-collar/steel mill town to a modern economy.

Buffalo is about 70 miles from Rochester, or a little over an hour's driving time. It is adjacent to Lake Erie, Niagara Falls, and Canada's Ontario Province.

This is the birthplace of the Buffalo Wing. Famous wing eateries include:

Things to do or see:

2008-11-25 12:15:34   Buffalo has some of the most beautiful architecture in this country, much of it is not preserved, a shame, but you can see the potential, and how great the city must have been at the turn of the 20th century. The metro area has similarities to most small cities in America, including Rochester. On the other side, the people, are some of the simplest, parochial, working class people I have ever met in this country, and they are very proud of this. To each their own, Buffalo was not for me. —MrRochester

2009-01-04 17:12:31   I'm with MrRochester on this one. I went to school at UB and couldn't wait to return to Rochester. Rochester, to me, is more sophisticated and scenic. Buffalo takes pride in it's rapidly deteriorating surroundings and seems to be oblivious to the fact that they are no longer a first rate city. It's a shame, too, because Buffalo could and should be a much nicer place. Instead, it's just a rusting eyesore. Just my opinion... —BatGuano