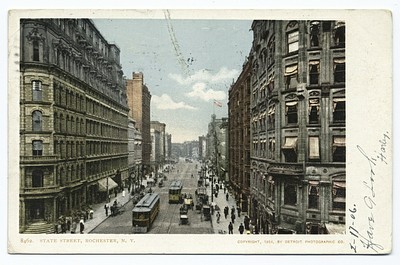 State Street is a downtown city route that has its southern origin at the Four Corners, where Main Street splits into East and West, and Exchange Boulevard becomes State. State continues north until it reaches the intersection with Smith Street, a tad south of Lyell Avenue, where it turns into Lake Avenue. Other important intersections include Church Street, Andrews Street, and the Inner Loop.

Not to be confused with State Street in Pittsford.