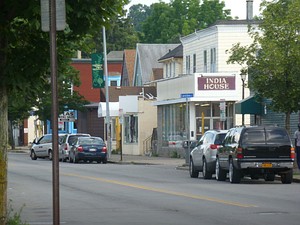 South Clinton Avenue is the southern portion of Clinton Avenue. It is a major north-south route for vehicle traffic going between Brighton and downtown Rochester. Its northern origin is East Main Street, which divides it from North Clinton Avenue. For about two blocks, the road is in fact called Clinton Square. South Clinton formally begins at the intersection with Court Street, where the numbering system also restarts.

Crossing over I-490, South Clinton then enters the South Wedge, followed by the Highland Park Neighborhood south of Gregory Street. From South Goodman to Field Street, it forms an active commercial border between Highland Park and Swillburg. This particular portion may be considered Rochester's center for international food, especially Southeast Asian. Although not officially designated as an "Asia Town" district, it is the closest thing in Rochester and probably all of Upstate NY. Here you will find the restaurants Flavors of Asia, the Hong Kong House, India House, Ming's Noodles and White Swans Asia Caffe, along with Zemeta Ethiopian Restaurant and the small shops African Food Center, Shangrila Grocery, India House Food & Imports, Ocean Garden, and Vinh-Hao Music & Video and Banh Mi Cafe.

Climbing the side of Pinnacle Hill, South Clinton continues into the suburb of Brighton, where it runs past apartment complexes, light commercial, and many professional offices. Medical practices predominate, especially around the intersection with Westfall Road, due to the proximity of the primary campus of the University of Rochester Medical Center. South Clinton finally terminates at the Brighton Henrietta Town Line Road.

In Brighton there is also access to the Erie Canal Trail

In approximate order, traveling southeast from downtown Rochester into Brighton.

Important intersections are (traveling south) East Main Street, Broad Street, Court Street, and Woodbury Boulevard, the Inner Loop, and I-490. The Metropolitan is on the corner of Clinton Square and East Main.

Important intersections are Alexander Street, Gregory Street, Meigs Street, South Goodman, and Highland Avenue, which marks the border with Brighton. Boulder Coffee Co. is on the corner of South Clinton and Alexander.

Important intersections are Elmwood Avenue, Westfall Road, and the Brighton Henrietta Town Line Road. There is a 7-Eleven and a Walgreens on the corner of South Clinton and Elmwood.