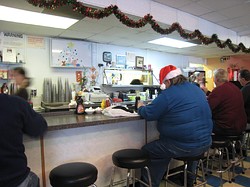 Santa (or maybe an elf?) spotted at the SWD December 08 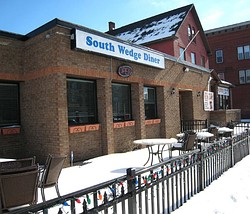 The South Wedge Diner is a locally owned diner in a brick building on South Clinton Avenue in the Highland Park Neighborhood. The diner offers typical diner food. Under the new owner there are always Asian and Thai specials.

They serve breakfast until 3pm everyday.


2005-12-27 22:26:02   SW Diner is open for dinners, the times need to be updated on the SW site. I brought it to their attention lastngiht when I was there. I like the food and the service is always friendly and quick. —DanDangler

2006-08-25 13:37:29   I used to go there very regularly until a few years ago. The kitchen staff didn't seem to be able to handle the pace when it got full so it was best to go when it was half empty. Otherwise the wait was way too long. I just went back for the first time in a few years and got the impression they've finally got the staff to accommodate the size of the place. The food has always been good and the atmosphere is neighborhood friendly. Big bonus - they actually use real fresh breakfast sausage, not the typical heat and serve crap. (Well at least they used to â I donât if they still do.) —ZedOmega

2007-01-22 08:59:53   I have not been there for a while, (I no longer live in Rochester) but when I did go, it was awesome. The decor may be lacking but the food is what you expect a good Rochester diner to be. I never had a service problem there myself. I heard a rumor that the owner was a dishwasher at another diner that saved his money and opened his own place. Anyone know if that is true? —BadFish

2007-04-09 13:43:15   Food is good and wonderful prices. If you are lucky enough to find an Asian or Thai special on the menu, GET IT. Owners and/or staff are Asian,
and these specials are a wonderful surprise. —ScotFear

2007-12-27 11:38:12   We ate here a month or two ago for breakfast, and it was very busy and quite noisy. However, that comes with a successful diner, so it didn't bother us. The food was good, with large portions for decent prices, and the waitstaff was friendly and good with refilling our waters & coffees. Since it's within walking distance from our apartment, I'm sure I'll go back at some point in the future. —SaraChristine

2008-01-16 20:24:10   This is a good diner, but I still like Highland Park Diner better, mainly because of the superior diner-like atmosphere there. Other than that, the food and prices are about the same at either diner, and they're just a couple of blocks apart from each other on Clinton. —EricArdis

2008-03-02 11:16:05   Just as noted in reviews above, nothing fancy here just good diner-type food at reasonable prices, with efficient service. —DottieHoffmann

2008-05-18 12:57:41   We live in the Highland Park 'hood and eat here about once a week. It's low key, with a friendly wait staff. The fish fry is especially good ( a lightly battered real fish, not a reformed square brick) and reasonably priced. My guilty pleasure is the Korean barbeque short ribs.

Breakfast is quite good, which is why you should get here early, ....especially weekends! Nice selection. We enjoy the creamy grits (ok, that sounds like an oxymoron, but they are really yummy!) Maybe it's good they only have them on the weekend....

2008-05-20 15:26:33   Get there early for a great Breakfast. I had the Cinnamon French Toast with Sausage ~wonderful~ I'll be stopping there whenever I get to town. —MarkStrickland

Sunday Morning is a virtual Who's Who of Rochester Nightlife in the light of day....not to mention a current update of who is Boinking whom.

i highly recommend it, if just for the social aspect alone, the food is pretty good too. —AlbertSpeer

2009-04-07 19:23:41   This place consistently gets the job done on a bleary-eyed Saturday or Sunday morning. No fuss, no muss, just breakfast food (with a few creative dishes thrown in) made to order. Sometimes that's all you want and need in the morning. —BatGuano

2009-09-25 07:49:14   The new owner has upgraded the menu - all the old favorites, plus some new more substantial meals, and an Asian Specials menu everyday. The Sesame Tofu (or chicken) is a particular favorite of ours - especially my vegetarian niece. If you go there and don't see somebody you know, you need to get out more often! —DonOlney

2010-03-26 22:33:41   UPDATE: Since I wrote the above comments {2008-05-18}, the Southwedge changed hands. We gave it a number of tries at different times, breakfast, lunch and dinner. Sad to report that not only have the Korean Barbeque Short Ribs disappeared, the fish fry is no longer light and crispy, the breakfast is, ...well, just nothing special. The new owner is friendly enough and your basic sandwiches are fine ...but, hey!! Where's the love???

I'll tell you where. It turns out that the cooking we loved at the Southwedge was by a talented chef named Tam. We were DELIGHTED to find out he just opened a new restaurant a block away, at South City Garden. —FranceScullyOsterman

2010-08-08 16:31:37   We tried this diner out this morning with some out-of-town guests in hopes of finding a new diner to add to our list. We didn't hate our meals, but also were not super impressed. Their 4-berries and peaches stuffed french toast was good, but was made with canned fruit (which is surprising since it's August - and the farmers market is basically down the street). Homefries were not seasoned all that well and needed to be cooked on the grill for a bit longer (although we like our homefries crispy rather than soft). Overall, we were not really impressed with the food. But maybe it was just our particular meal choices that didn't impress us? Looking at what was coming out of the kitchen, their eggs benedict dishes looked pretty good. Service was pretty quick and friendly. We might give it another try if the mood strikes... but probably will not be running back for another visit any time soon. —Acarp

I must say it's one of the best ones I've had. The broth was light, but very tasty. My friends and I now have a new place for Pho! —EmRosario

2011-02-14 00:23:05   Amazing pho broth but overcooked noodles and extremely overdone beef (very chewy... similar to jerky). The garnishes were sad - wilted basil and brown bean sprouts. Despite all this, I will order the pho again ( with the raw beef on the side perhaps so that I can cook it in the hot broth myself). I thought the Asian dinner menu seemed overpriced - probably because each entree includes soup or salad. The owners should consider making the soup/salad optional (and an up charge) instead of building it into each entree...that would probably make the Asian dishes more palatable price wise. I will be back and ordering the pho! —OneLove

2012-06-17 11:45:40   Does anybody know what the deal is with the patio? Now that the weather is warm, I've been wanting to eat dinner outside here, but every time I drive by, the tables and chairs are all piled and chained up, and all the patrons (presumably) are sitting inside. Why have a patio and furniture if you're not going to use them? —ajh

2013-02-10 07:38:59   Ordered a Thai dish from this restaurant yesterday because in the past we've had really good Asian food from this place. It has to be really bad food for me to toss it, but I did. This was hands down the worst food I've had from a restaurant in years. There's much better food to be found on South Clinton and I'll be eating elsewhere. —dawntucker