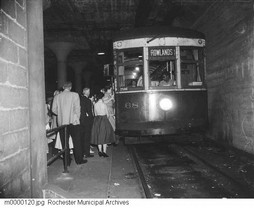 In 1918 the Erie Canal was re-routed to by-pass downtown Rochester, and in 1919 the abandoned canal was bought to serve as a grade-separated route for the heavy "inter-urban" streetcars that were seen as obstructing surface street traffic. Tracks were laid in the former canal, now a dry open trench. Only in the downtown area was the subway in a tunnel, under Broad Street. The cars were powered by overhead electric wires, like streetcars (such as current systems in Buffalo and Seattle), not an electrified "third rail" (such as New York and Toronto). The line opened for passenger traffic in 1927, after several construction delays.

The Rochester Subway was plagued by limited resources and a transportation and land-use system that already was becoming more and more automobile-oriented. Rochester abandoned all surface streetcars by 1940, leaving the subway as a single line of what had been a much more comprehensive system. While ridership peaked during WWII due to gasoline and rubber rationing, it quickly declined after the war. The region's population was growing, but in an auto-oriented way as new, low density developments sprawled across suburban towns far from the route of the subway, which was never extended.

In addition, the subway suffered from the meandering, northwest to southeast route that was pre-determined by the route of the old Erie Canal. While this route had advantages for a long-distance canal built in the 1810s and 1820s, it was not necessarily a good route for intra-city transit in the 20th century. Federal funds sought to extend the eastern terminus to Monroe Avenue in Brighton in the 1930s were denied.

By the late 1940s and early 1950s, plans were developed for the system of high-speed expressways in and around Rochester. The eastern part of the subway route was chosen for a portion of Interstate 490. With declining ridership and governmental policies that supported private automobile over public transportation, there was little resistance to the abandonment of the subway. Passenger service ceased June 30, 1956.

The western end of the former subway was still used for freight traffic through the 1970s. Gannett used the tunnel for delivery of newsprint to its downtown facility at Broad Street and Exchange Boulevard until new presses were installed for the Democrat and Chronicle at Canal Ponds Business Park in the Town of Greece in the late 1990s.

This portion of the article represents an attempt to describe the subway today as it exists today. The sections listed below generally follow an East to West path through the tunnel. In place of formal names for each section, they are generally referred to by either their historic significance or the buildings above them. Feel free to rename as you find appropriate.

East entrance to the Subway - by Andrew88

Beyond the chain-link fence bordering South Ave lies an easy entrance to the subway. This location is found directly behind (and beneath) Dinosaur Bar-B-Que. From the safety of the sidewalk, you will be able catch a breathtaking view of this crumbling and overgrown entryway. Along the right wall is a small building that has been thoroughly ravaged by time and vandalism. Graffiti also appears along this wall. Entering here will take you beneath Court Street.

An underground pool, part of the former Johnson and Seymour Millrace

This location has some of the most interesting remaining structures. It is also the main section used as makeshift housing for the city's homeless. The first structure you're likely to notice is the massive stairwell rising to the ceiling in the center of the tunnel. Not long after you'll notice on your left hand side a pool of water crisscrossed by a catwalk pouring out into the Genesee River (this is part of the former Johnson and Seymour Millrace). Traveling further into the tunnel beneath the Rundel Memorial Library Building, you'll find a small building along the right wall. Behind it is a terror inspiring opening in the wall, just large enough for the average person to crawl inside.

Between this section and the aqueduct is another small section that stretches East under Broad Street. You won't find much here beyond the twisted remains of a metal staircase and homeless living in a raised alcove along the North wall.

Beneath the Rundel Library - by Andrew88

This section of the tunnel has some of the most beautiful graffiti you're likely to find in the entire city. With the abundance of natural light allowed in through the aqueduct's arches, it is an ideal location for said art to be created and displayed. The tags on the walls change frequently, and as such this site demands return visits. It is a popular destination for photographers. (The Broad Street Bridge has its own page with more information)

Following the Aqueduct you travel into darkness, natural light disappearing completely. You arrive at a wall with a single small door for yourself to enter through. Having remained in use many years longer than the previous sections, the decay of this section has a unique quality. Originally used for paper delivery for Gannett News (now: Democrat & Chronicle) and later storage, the remaining equipment also lends itself to the different sense of atmosphere this section has. Along the left wall you'll find a loading dock stretching across this space. Traveling through this section of the tunnel you'll arrive at another wall on the far side that allows you to exit through a large garage style opening. 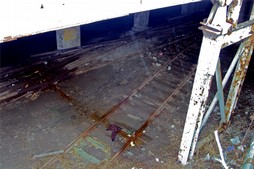 Looking into the tunnel's West section - photo by TomMaszerowski

This section starts with near complete darkness, light only visible coming in through a street level drain. There are fewer noteworthy structures from this point onward. The tunnel opens to light and fresh air once again near Nick Tahou's. It is possible to enter and exit at this location, even bring a vehicle into the tunnel. Unlike the Court Street entrance, the original tracks are still in place here. 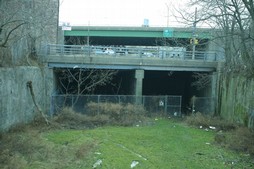 The tunnel at Brown and Broad. - Photo by TomMaszerowski

As you reach the end of the tunnel, or the West Entrance, there will be manholes along the tracks. Be careful as most, if not all, of the manhole covers have been removed. The tunnel ends at the intersection of Brown and Broad streets. This access point has been fenced in the past, so be prepared to turn back.

The subway was scheduled to be partially filled in with dirt back in 2005 and the Subway Erie Canal Revitalization (SECR), also known as Chill the Fill, umbrella group tried to stop this from happening. Among the reasons people had for objecting to this were:

Alternative proposals raised during the controversy:

In the fall of 2009 the City was granted funding under the stimulus package. On Monday, February 8, 2010, Broad Street

was closed between Allen and West Main to fill in the West Tunnel and repair the road's surface. The city moved foward with the west section fill of the subway tunnel (near Nick Tahou's) and the West Tunnel no longer exist and have been "filled in".

Remains of The West Tunnel - by Andrew88 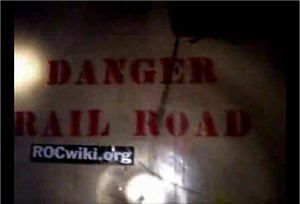 
2007-03-08 15:59:03   The End of the Line is a really fascinating DVD if you're into Rochester history. It gives an interesting view of our fair city during the time the subway was in service. —EastSideStephen

2007-10-13 11:57:29   "It would needlessly destroy property that could otherwise be put to use to benefit the city. The proposed "Broad Street Tunnel Project" will cost the city $21 million dollars to complete. A small fraction of that money could be used to seal off and maintain the tunnel for several years, and there are lots of things in the city which would be better uses of the $21 million, such as the Rochester Schools Problems."

That's a silly statement after the whole fast fairy nightmare. Why wasn’t that money spent on City Schools? —ChristopherMoshier

2008-12-10 12:26:59   I've been down in the tunnel for work purposes (investigating parts of the tunnel that are deteriorating) and even though it's dark, dank, decrepit and dirty down there, it speaks to many possibilities, one being a revived light-rail system. Of course, the cost of such a system makes the idea of it being constructed nearly laughable. Rochester doesn't have the population or the money to justify a new light rail system. Maybe if President Obama has his way, we'll be able to do something like that in Rochester... But I doubt it. So in the meantime, I'd leave the tunnel for the bums, graffiti artists, paintball players and fearless citizens. There is no urgent need to fill it in, therefore, use that money elsewhere.. maybe start planning a light rail system? Pshaw right. —BatGuano

2009-12-24 12:47:54   Contrary to previous comments, there IS an urgent need to fill in the tunnel. The tunnel is essentially a long bridge carrying Broad Street over the former railroad tracks and that bridge is over 80 years old and collapsing. Broad Street west/north of Main Street already has lane reductions. Unless the tunnel is filled (or costly repairs made) Broad Street will have to be closed entirely.

The notion of re-using the tunnels for transit, while popular, is misguided. The route of the former Rochester Subway was dictated by the early 19th century route of the Erie Canal, which was located where it was for reasons of topography. Topography is a poor organizing principal for a high-capacity transity corridor. It was a mistake to re-use the canal for transit in the 1920s and it would be a mistake to re-re-use the route for transit in the 21st century. —ChrisStone

Sir, 490 runs along the bed of the old canal corridor. The current tunnel runs straight through the center of the city. I don't see how right-of-ways that through the busiest part of the community can be considered obsolete.

2010-11-15 18:16:13   Thumbs up, jondaggar. I believe light rail has a place here, it just needs to be approached using new ideas/approaches. Double thumbs up for the Robert Moses diss, as well. —BatGuano

2012-06-21 19:29:28   Rochester's a pretty cool city; the tunnel and the piece of old road above it could be used to create an urban duality much like that of New York's High Line Park project. And, upon some thought and... well, exploration... there are lots of places which could be used to create an above/below park of sorts with shops and the like. I've considered drawing up a proposal to the city but further research would be necessary. —RocExplorer

2012-09-21 21:51:54   Well, 30 years ago, the best place to get in was on the west end, south side of the Broad St. Bridge, down at the park level. Hop up on the stone wall, shimmy past the fence, and climb down into the subway bed. I doubt that access point is still as easy as it used to be to get through, and I doubt that I'm still able to do the contortions needed. —alex-c

2014-08-19 17:54:39   Went here a few days ago with a small group of friends. There was a large group of people down there already, although they only stayed in the Aqueduct. When we were under Broad St we actually encountered another small group of people down there with their dog, the thing scared the living daylights out of me when it walked up to us. We didn't go all the way because on of our party was starting to panic due to anxiety, although we did get about as far as what could have been just below South Washington St. We actually met up with the people with the dog again above ground when we were following the path in search for where it ended, they were nice enough to point us in the direction of it. While I had assumed the tunnel just ended in darkness, there was a new West Entrance between where W Broad intersects with Allen and Nick Tahou's. The entrance right behind the War Memorial now has a fence leaning up against the wall to be used as a ladder —Acebycircle