Tower280 at Midtown - previously known as Midtown Tower - was a former office building and hotel in the Midtown Plaza complex. It is now being redeveloped. Branca will have a second location here.

Christa Development was originally planning on starting a rehabilitation project in 2010. The $62.2 million development calls for commercial development on the first three floors, 186 market-rate apartments on floors 4-13 and 24 owner-occupied condominiums on the upper floors. Some condos will offer garden terraces. Anticipated completion of mid-2012. 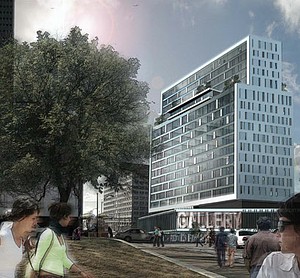 The Tower at Midtown offers five floors of modern commercial office space in the heart of downtown Rochester. Underground parking with direct access into the building makes The Tower a dream location for downtown employees.

The redevelopment project is a 50/50 joint venture of Buckingham Properties and Morgan Management. Construction of the 357,000 square foot structure is projected to begin in 2013 with completion expected in 2014.

Additional information on the latest plans can be found here:

Photographs taken inside the skeleton of the tower in February 2014