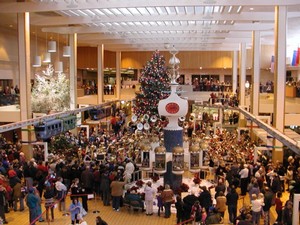 Midtown Plaza shopping mall was a retail and commercial development mainstay of downtown Rochester from 1962 when it opened until the mid nineties when the anchor department stores left the plaza. See time-line below.

Beginning in the 1950s two downtown department store owners, Gilbert McCurdy of McCurdy's and Maurice Forman of B. Forman's, advocated a downtown mall to counter the emergence of suburban plazas and their threat to downtown retail. In the heart of downtown, Midtown Plaza became the nation's first urban enclosed shopping mall when it opened in 1962. Designed by the father of the mall and a Jewish, socialist Austrian refugee,

Victor Gruen, Midtown was an immediate international sensation. City officials and mayors from around the globe came to see Gruen's answer to the urban crisis.

Unlike other "bastard developments" that were cribbed from Gruen's ideas and then tossed out to the suburbs, Midtown was conceived as a town square. It offered a 400 seat auditorium, numerous benches, a plethora of art and a sidewalk-style cafe. Midtown was intended to be the center of Rochester's casual social life as well as a shopping center. A skyway and tunnel system connected it with all major downtown office buildings east of the Genesee River as well as several parking garages.

Where Malls Go to Die by discussing both Midtown Plaza and Medley Centre, formerly known as Irondequoit Mall. The mall also was featured in a story on

Stores and tenants began vacating the premised in preparation for asbestos removal.

The question became: "will Midtown be successfully renovated, revitalized? What will it take?"

In November 2006, Mayor Bob Duffy asked and City Council approved a $250,000 option to purchase it for $6 million, although they later allowed the option to expire3. In November, 2006 the City solicited feedback on how the property should be redeveloped. It had designated the site as an

In an October 16, 2007 press conference, (then Gov) Spitzer announced that the State would pay to demolish the 8 acre, 6 building complex so that PAETEC could erect their new headquarters, moving from their current location in Perinton. They estimated that when the new facility opens in 2011, 1200 people would work there - double their current workforce. The city was to help fund the purchase of the mall from Blackacre Bridge Capital LLC, the state would help fund the demolition and PAETEC would spend an estimated $40-100 million in construction. More details at the

On July 25, 2008, Midtown Plaza closed its doors to the public for the last time. Only Clear Channel, Trailways and Minuteman Press remained in the complex,

Midtown Plaza was demolished in 2009. As of 2013, S & B Mini-Mart was the only Midtown retailer left in its original location.

To participate in a survey on local architecture visit,

I thought that the city was taking about ripping this down and making it a park. -BretteLuck

2005-12-08 18:59:54   It was a Wegmans, of all things. The space is currently unused, or at least it doesn't have a store front. Also, as far as I can tell, the owners haven't said anything about tearing it down. All the plans exclude them for some reason. —TomMaszerowski

I could envision this mall taking the concept of the Village Gate mall to the next level, provided this community were to support it. —MrPhil

Tom - There really are no owners anymore, a NYC trust owns the mall and they would prefer to sell it then redevelop the mall.

Dan - Is magic mountain still there at Christmas with the monorail? What does the monorail drive through if not?

I would love to see Midtown become a mall again, but in reality I dont see it happening. Stores need to be added downtown, but a better use would be to have them on street level. An indoor mall in a city is just not necessary. —MrRochester

2007-10-17 23:17:21   Its funny, everyone is saying how much they love to come to midtown and how special it is for them now that it is being demolished. Where were these people before? If they really did love Midtown, it wouldn't be in such sorry shape. —JohnJoseph

2007-11-08 21:48:21   It's a shame how Midtown was neglected. With so many hotels having business meetings and conventions and people moving back into downtown, alot of people are looking for a local place to shop now. I've actually talked to a few out of towners who would love to be able to shop at a local downtown area. I've also talked to a few people involved with the renaissance plan and now as far as everyone is concerned, it's dead. Why not just tear those buildings down, move the stores from there to Midtown, and if they follow through with the plans to put apartment lofts in the old Sibleys building, and if Paetec has 1200 workers there, wouldn't that be a great start to revive the mall? Not only can we revive the mall we can create a great new downtown, but don't take my word for it.

2007-11-22 13:06:22   I hope the current stores find new locations around the area. Some ideas; the Chase Tower, The Sibley Building, Chestnut Street, and Sagamore on East. —ScottHendler

And yes, PAETEC's 1000+ new workers is welcome news, but with 50,000 people already working downtown, don't you think the impact of just 1000 more is being oversold a bit? —JasonHaremza

2008-01-24 07:55:32   I don't feel bad that Midtown Plaza is getting torn down. It's old and run down, and it only has a few stores left anyway. I hope the stores relocate, so nobody loses their job, but I won't be sorry to see the mall itself go. I hope that doesn't sound too insensitive. Also, the Paetec Headquarters will hopefully help the downtown economy (since employees will shop and eat there, etc.) and let's face it... it needs help badly. —EricArdis

2008-12-06 20:59:51   Yes Eric I think that was an insensitive comments, I will miss Midtown, the Midtown I new as a kid growing up, espcially during christmas time. Midtown was the First big indoor mall like it in the US. It is a historical place. —bjpbunny

2021-08-02 18:40:21   Midtown is a place that needs to be resurected from the dead and rebuilt in some form. Downtown Retail needs an atomic kick in but and this if done correctly could be it. —MatthewClarkDarby