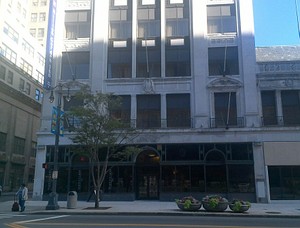 The Hilton Garden Inn Downtown is a 107-room national chain hotel in the Convention District. It was redeveloped from the abandoned National Clothing building, which was built in 1926 and designed by J. Foster Warner to serve as National Clothing Company's flagship department store. From 1898 to 1925, however, the site was home to the Eggleston Hotel, which moved to 48-50 South Avenue.