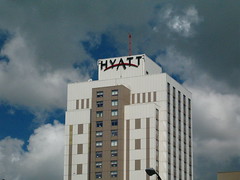 The Hyatt Regency is a hotel located in the downtown Convention District.

Christa Development Corp and Morgan Management, who also own and renovated the Strathallan Hotel, purchased the building with plans to renovate and keep the Hyatt name. They planned a new lobby, renovated rooms, rooftop lounges and windows in the ball room.

On April 28, 2017 a Starbucks opened as part of their multi million dollar renovation. As part of the renovation 3 other restaurants are planned in 2017; Center City Terrace + Lounge , The Street - Craft Kitchen & Bar and Morton's Steakhouse.


2011-08-12 00:24:04   I had a horrible stay here last spring. There was a miscommunication between the front desk and housekeeping, and housekeeping believed we were leaving when we were actually staying another night. When they started cleaning the bathroom, they just threw away everything they found, including toiletries and medications. When I talked to the manager about it, very little could be done, and nothing was recovered. They are clearly doing quite a bit of construction, and this will likely impact your stay. —SarahR