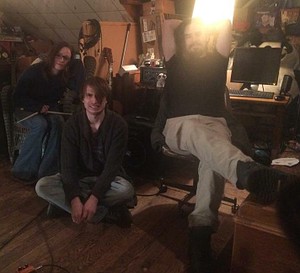 It all began with a young man by the name of Spaz. He wanted to start a band more than anything in the entire world, but unfortunately he couldn't find anyone to play with. He searched the Earth looking for fellow bandmates, but alas he could not find anyone to play with, and when he did, something would always happen that would prevent them from being a member (dragon attack, zombification, spontaneous combustion, or the worst of all: they had other shit to do). But one day while hunting sasquatch, as he's one to do, he came across a list...the list of a man named Craig. It was a magical list on which you could write any request, send it out, and it was possible that some people would respond to it. So he wrote out his request and called upon his trusty hawk Tupac to deliver it. Weeks and weeks went by but there was still no response. He sent out several more requests but still Tupac came back empty taloned. Spaz was ready to give up but he sent out one last message. Anyway I'm getting bored with this. Spaz met Shawn and Teddy on the list of craig and they formed a band...yippee.

But it was not to be all puppy dogs and kitty farts for long! In a tragic turn of events for the band, their bass player, Shawn, had to return to his home planet of K-Pax to help them deal with their shortage of Pez and Pez dispensers alike! (You see it was Shawn who introduced them to the planet on one of his returning trips home from Earth. He brought them over to be an nice treat for the younglings however the population became obsessed. In Shawn's absence the entire planet's economy became entirely dependent upon Pez to the point where the sweet candy treats literally became the planet's standard form of currency. Things were going well until the core of the main Pez warehouse/ manufacturing plant's reactor went critical and exploded. It didn't destroy all of the Pez but it dealt a mighty blow to the economy, plunging them into a severe depression; both economically and mentally/emotionally.) So it was up to Shawn to bring balance back to the economy and to his planet! Reluctantly, he had to leave, but he left an animatronic copy of himself as a replacement. Unfortunately for Lupis, it moved to Arizona! So the saga continues. Will Shawn be able to save the people of K-Pax? Will Lupis find another bass player? Could this bio possibly be any more obnoxious? Stayed tuned and find out on the next episode of Dragon Ball Z! *din din din*

So the band, with the help of their trusty hawk, Tupac, sent out another request using the list of Craig. On a side note Tupac, at this point, had reconnected with his long lost love Hp Office Jet All-in-One Falcon, but I digress. Likely because of problems at home though, Tupac once again came back empty taloned (Hp Office Falcon had been "jamming" up on him again...whatever that's supposed to mean). Time was running out for Lupis. They had a show coming up, and though they could play it with just two persons, they would sound even more like audible garbage than they normally do. So they turned to their good buddies Intrinsic and asked their guitarist if he'd fill in. He complied to Lupis' request. After a successful show, fun times jamming, and a new lack of concern of schedule conflict because of a cat on a hog, Lupis asked the guitarist if he'd like to be in the band, to which he replied, "fuck no!" And after his peck wounds healed, it was so; Al was to be the new bassist of Lupis!

A well known fact about Mr. Theodore Potter is that he cannot go anywhere, for any significant amount of time, (significant in this case being greater than, or equal to, 1 hour, 38 minutes, and 42 seconds) without blowing out a light bulb somewhere on the premises. At its first observation, the band saw it as nothing more than a funny peculiarity that made him, well, him. After some time, and over a dozen light bulbs later, Spaz began to become slightly annoyed because of increasingly high light bulb budget. The band solved this problem when they happened upon a poor, misguided, light bulb salesman, whose only crime was coming by the wrong alleyway at the wrong time. What señor Potter didn't know (he insisted that, despite his very Aryan appearance, he was of Spanish origin) was that there was a reason behind it all; a reason of the paranormal variety. You see, since he was a small child he had been being followed by an evil spirit that sought vengeance against his family ever since his great great great grandfather pushed him off a cliff for a roast beef sammich. He wanted that sammich more than anything, and his soul was left with a mighty rage when he was unable to consume the deliciousness. Why the spirit waited so long, you ask? Some sort of thing where he was forced to wait three generations and attack the first son of that generation? No, no, actually he spent quite some time trying to get out from the chasm; flying's not as instinctive as one would think. Anywhobastank, the reason the lights were always blowing around Teddy is because the spirit hated light bulbs. What? Did you think it had to do something with the spirit trying to draw energy from the area in order to do harm to Teddy? No, I don't think that's it. I'm pretty sure he just hated light bulbs; something about how unnatural the light looked to him. I'm a band page, I would know.The spirit finally came to the conclusion that this kid would never be anywhere away from the horrid bulbs of light. It took over his body. It made him do odd things in an attempt to make him look foolish; just as foolish as his fantastically great grandfather made him look, all those years ago. It made him wear short shorts, and cowboy hats. It made him tip 5% on every bill even when the service was spectacular. (Conversely, it did make him tip 20% on one bill where the service was anything but pleasant.) It made him attempt to cook Minute Rice in 55 seconds; needless to say, it was a total disaster. The band had had enough. Everything else was tolerable, but that whole rice thing? No. Fudging. Way. Spaz called upon his friend, and original bassist of Lupis, Jared. Jared left the band early in its development because he realized he'd rather be a ninja; so you know, he went and did that. As well as being a ninja, though, Jared is an expert in the paranormal. Suspecting demonic possession, Spaz thought that Jared would be the best person for the job. Spaz made the call, and much to his surprise, the phone range right next to him; Spaz didn't see Jared because Jared's a motherfucking ninja, that's why. Jared was already there because sometimes he likes to sneak in people's homes and just slightly rearrange their things and watch with pure delight as they frantically search for their keys. On a side note, if you've ever misplaced your keys, it is actually far more likely that Jared moved them and is currently, quietly, laughing at you. Jared was able to communicate with the spirit, because he's a psychic ninja or some shit, and discovered the best way to appease the spirit was simply by giving it a roast beef sammich. Since none of them knew where the nearest Arby's was, Jared decided to kill Teddy; so he did. Well, not really. Spaz and Al, after Jared got in a few katana slices, decided that that probably wasn't the best course of action. Reluctantly, Jared sheathed his sword. Instead the three young chaps put Teddy on a raft made of tires, toothpicks and duct tape, and sent him up the Genesee. There have been whispers that Teddy was spotted in a wooded area by its bank, and that he and the spirit have agreed to coexist as long as Teddy supplies roast beef and the spirit pays rent. How does a spirit pay rent? That's one thing this band page doesn't know. Stay tuned for the next excerpt from The Days of Our Lupis.

Lupis was now tasked with finding a drummer. Spaz and Al had tried out several candidates, all of which, frankly, were disappointing. Spaz has a hard time, “letting people down easy,” and as some say, “being nice,” and on one occasion made a man cry; he was believed to be an ex-Marine. They tried using the List of Craig again, but Tupac was getting tired of doing the band’s bidding and, after setting the list on fire, told the band to go fuck themselves. After fornicating with each other, Al and Spaz thought maybe posting within the facebooks would work. What a pitiful attempt that was. All hope seemed lost. That was it. The experiment that was Lupis, was over. Spaz had the thought that maybe he could go back to hunting Sasquatch; despite “never technically catching a live (or dead) Bigfeets,” it brought in significantly more money. Just then, he noticed something; it was a message. It was posted independently on the faceyspaces from a disciple sent from the scene- the 585 music scene! The scene had used the facebooks as a conduit with which to communicate and sent one of its most promising drummers to offer assistance to the band. She too, coincidently, was originally from the planet K-Pax (which has since been destroyed to make room for a hyperspace expressway, oddly enough, just as Shawn was starting to get the economy back on track). Spaz directed her to a few recordings and she thought that they were terrible, and the songs themselves were terrible. She, however, was feeling quite bored and decided to try out anyway. Even though she had been drumming for a short amount of time, she showed why she was once a member of the K-Paxian elite- you know, because the K-Paxian elite are all known for their good drumming. She hit fairly hard, had good timing, was creative, seemed like a decent person, had a brain, (the Tin Man had tried out as well, and while Lupis could have handled the lack of a brain, the constant oiling was a bother), and most importantly was sorta willing to play with them. After the try out Al and Spaz realized that there was still hope. That the band could carry on. That they would keep Lupising with Monica on the drums.