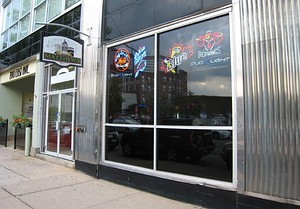 Matthew's East End Grill was a Bar and grill located on East Avenue. Closed in July 2017.

2008-07-05 15:06:55   This was my first time here. I live in the area and never been able to go. So last week, me and my girlfriend finally decided to go here for food. Unfortunately, food was horrible! I will not go back here for food and if you are looking to get some burgers or something, this is not the place! We sat outside, server was very friendly, no camplaints there. While we were looking at our menu there was a couple sitting behind us and one of them ordered a burger and it looked good, i asked her how it was and she said not the greatest burger. (i should have listened to her) i got my burger, it looked really thin and it looked VERY dry. There was no sauce on it (usually restaurants make their own specialty sauce or seasoning) nothing like that. It was very dry and it just had this really weird taste smell to it. very hard to describe. Waffle fries were also not good, it was not tasty at all. My girlfriend got the burger melt, she didn't like her food either. Few days later we tried Nathaniels on Corn Hill (similar to Matthews) but their food was much better, and fries were awesome. I think at Matthews what they did was, instead of cooking the burger "fresh" itwas already pre-cooked, so they just re-heated. It was really gross! Matthews will be a nice hang out with friends as a bar, but don't go there for a meal! Go to Red Robin for the best burger! —DennisPtak

2008-07-20 20:58:11   Went for happy hour, and was dared to eat their garbage plate. It was a nice surprise. The macaroni salad was cool, and the waffle fries added some crispiness. The hot sauce is a little thick, but that was welcome. The wings here are good as well. —ZachSmalt

2009-01-08 14:30:34   We've been there about a dozen times over the past year, and the food has always been great. We've had everything from the bar food (wings, plates, etc.) to more dinner food, and everything has always been cooked very well. The bartenders and waitstaff are both friendly and fast. You never have to wait long at the bar. They can actually make change for the last customer and take your drink order at the same time. Very rare, nowadays. They have a great selection of beer both on tap and bottled, and plenty of TV's to catch the game-du-jour. The only bad thing would be that the music is deafening at times! I like my music loud, but they sometimes go overboard. We'll be back soon. —Petey

2009-11-24 10:27:13   Talk about night and day experiences. I have gone to Matthew's twice lately, both times for Monday Night Football and their 25 cent wings special. The first time was terrific. We were seated near a television and joined a raucous crowd in cheering on the game. The wings were perfect- crisp skin, well sauced, and flavorful. The beer was a little pricey, with the cheapest selections coming in the 3 dollar range (compared to the 2 dollar range at neighboring Salingers). Still, since the wings were so cheap, we didn't mind shelling out a little extra for drinks. On our second more recent visit, however, we had a terrible evening. We were seated away from the nearest tv, and when we asked to be moved, were given the brush off. They also declined our request to turn the sound on in the main seating area because it was "dinner time." The wings, though still cheap, were nowhere near as tasty. They had clearly switched to some brand of jumbo wings with way too much grayish meat and not enough sauce. It was not worth paying the extra for beer with disappointing food and an atmosphere like this, so we left before halftime and went to a better bar. On another note, our service was lousy both nights. We had the same waitress each time, a rather sour young lady who made us feel like our presence was an unbearable burden. She both was snappish (unprompted she told us we could not have a box for leftover wings— as if!) and sluggish with bringing drink refills. —JeffreyL

2010-06-28 23:34:26   best wings in town. a great place to watch the superbowl (they always have a free half time buffet with all of your munchie favorites). i love this place, it is a neighborhood staple. —CarBenBra

2011-04-08 18:46:32   This is the bar that all the newsers hang out at. Seeing news people living their lives and drinking is kind of like seeing your teacher in elementary school go to the bathroom.. You realize that they are human. In any case, the drinks are a little pricey but, on a recent visit, me and the crew had a great time shooting darts, playing pool and making friends. —BatGuano

2013-06-29 10:57:55   We stopped down to Matthews' for a meal and quiet break this week during the Jazz Fest. People watching on the quiet patio was fun, the beer was cold and wet, and my burger was perfectly cooked and tasty. What's not to like? —jgerek