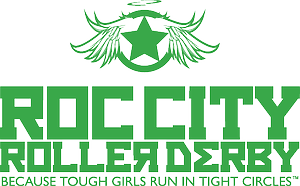 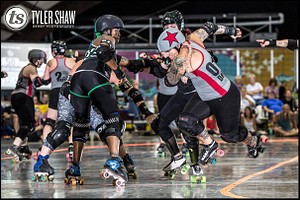 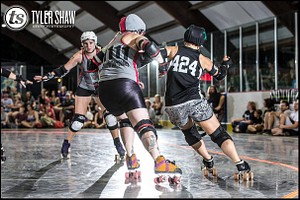 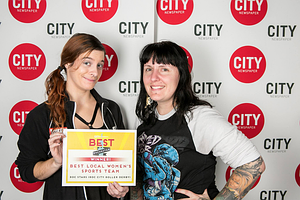 Roc City Roller Derby (RCRD) is a not-for-profit athletic league that strives to promote flat-track roller derby; empower league members to develop as athletes and leaders; and to contribute to the greater Rochester Area through thoughtful community engagement. RCRD's home season is from March - August, with bouts at either the

Bill Gray's Regional Iceplex or the Genesee Valley Sports Complex. The Dome Center or "The Dome" in Henrietta is a former venue.

Roc City Roller Derby became a member of the

The league is made up of two travel teams: the Roc Stars and the B-Sides. The Roc Stars are the league's WFTDA chartered travel A-team, who skate sanctioned games against other WFTDA travel teams. The B-Sides are the league's B team, and face off against other WFTDA B teams, and other teams from the area. The three retired home teams are the Rottenchesters, the Midtown Maulers, and the 5-H8-5s.

Introduction and halftime are ASL interpreted for the deaf. Information on the sport of roller derby is available at bouts in the game programs as well as by "Dr. Derby" who will walk around and answer any questions you may have.

RCRD Beginnings:
Founding member Resident Eva had a revelation while watching the Austin roller girls zip around their track sending competitors flying - She was in the wrong place. Rather than warming a folding seat in the stands, Eva knew she belonged on the track. Sadly, Rochester offered no such opportunity. When she looked around and saw no one else was working toward creating a league, Eva did it herself. From humble beginnings - and the invaluable help of members like Emmeline Spankhurst and Emasculate ‘Em - Roc City found our first private practice space in 2008 and began adding members.

2009-08-10 09:27:16   The bout on Saturday night (8.8.09) was so much fun. I was so happy to see all the support we are receiving from the Rochester community. I love this city and am so proud to represent Rochester. Playing roller derby is not only a physical and mental activity it is a sport that allows us to give back to the community by raising money for local charities. Our last bout raised money for the Breast Cancer Coalition of Rochester and the American Heart Association. Other charities that we've helped include Golisano Children's Hospital, Sojourner House, Ontario-Yates Hospice, Roc-City Roller Park, and Sample Soap. The list will continue to grow as we continue to play, so please come out see us, we promise you will have a great time! —VenJenceVonSlay

project I saw in an issue of Make Magazine a little while back. Everything's funner with microcontrollers, right? ;-) —RyanTucker

2009-08-11 14:54:14   Ryan, that's an interesting project. The league that was testing that out is Gotham Girls Roller Derby, based in NYC (and current WFTDA national champs). Everything IS funner with microcontrollers. —TimRoy

2011-05-04 13:18:21   Roller derby is an exciting and dramatic sporting event that people of all ages and interests can get behind, and it is an incredible supportive and empowering community for participants as well as for fans. I am so glad to have a league in our city and so happy to be a season ticket holder for the second year in a row. Come check it out! It is an affordable way to spend an evening with your family or your friends, plus there are many opportunities to support charitable causes while you're there so you get to do good while having an awesome time. —LaurenCocilova

2011-05-19 19:21:09   @damian had you watched a derby bout before? i can see how if you were expecting one thing and it turned out to be totally different, it could be disappointing. i admit- i'm a derby fan- these girls put on an exciting, hard-hitting bout and it's fun to watch- especially from suicide seats! —portia356