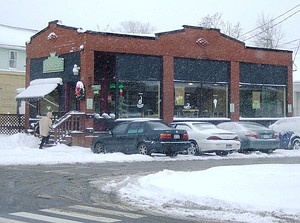 The Gelato is also sold at the Eastman House Cafe.

2010-10-05 10:39:25   Excellent gelato. For many years I lived where there were many gelaterias and after moving to Rochester I searched for gelato and found very few locations (some of which are only open during the summer), but Royal Cafe is my favorite so far. Am a bit puzzled by the previous comment indicating that the gelato here is "definitely just ice cream", as I do not have the same impression. The difference between ice cream and gelato is that ice cream has more butterfat, and as a matter of fact, the FDA defines ice cream as having a minimum of 10% butterfat while gelato is more like an "ice milk". For me, a good gelato has good flavor and a consistency which makes it seem "creamy" like ice cream and that's what I find at Royal Cafe. —KairakuShugisha