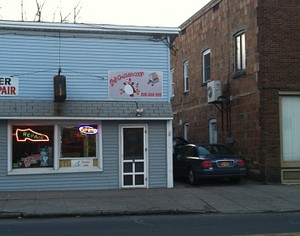 The Chicken Coop is a restaurant specializing in fried chicken. Located on Main Street in Webster, it offers both take-out and delivery.

The fried chicken was spot on — crispy, crunchy, and tender (and just as good cold the next day). We all enjoyed the side and would order them again: mac&cheese (mmm, strings of cheese), mashed taters w/ homemade gravy and the green beans with the addition of tomatoes as a tasty touch. The service was friendly and personable. We all agreed it was a delicious meal, and what a treat to have homemade fried chicken. Though we live in the city, we will definitely be back to Webster for more.

Do note that while there are a couple of small tables, it is primarily a take-out place. Also, the chicken is made fresh, not ahead of time, so your best bet is to call in your order and pick-up, so as to avoid a wait while it cooks. —LizDee

2015-09-01 10:17:35   Had lunch here and it was outstanding, albeit there's virtually no seating available (3 tables, 2 chairs each and if they were full people would be in each other's laps). Would absolutely go again, best fried chicken in the area and some of the best I've ever had. —travisowens