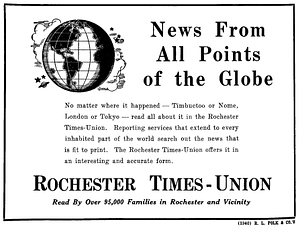 Advertisement from 1940 Rochester City Directory The Times-Union was the late-afternoon newspaper as the Democrat & Chronicle has always been our morning-delivered newspaper.

The Times-Union began publishing newspapers in 1918.

Pulitzer Prize for its coverage of the Attica prison riot. The prize was for "Local General Spot News Reporting" and was awarded to John W. Machacek, who served as a reporter for the Times-Union from 1967 to 1983, and Richard Cooper.1

Due to decreased readership the Times-Union ceased production on June 27, 1997.2