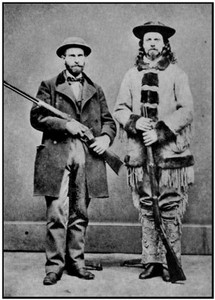 Henry A. Ward (left) with

Ward's also served as the agent for foreign artists and craftsman to sell their wares to U.S. institutions. Some notable artists working with Ward's at the turn of the 19th century included:

Carnegie Museum of Natural History (text in quotations is taken from the exhibition labels in the museum's "Fierce Friends" exhibit):

Mounted specimens from Ward's were suspended using brass rods and hooks, with a wooden base. A Ward's nameplate was affixed to the base, reading "Ward's Natural Science Establishment, Rochester N.Y."

At the start of the twentieth century, though, Ward's began to decline in prosperity. Better funding and increased public support meant that museums were able to create taxidermy departments within the institution, hire collections managers, and fund collecting expeditions to collect (or steal) "exotic" (and thus more desirable) specimens. The market for pre-prepared collections waned and, in 1928, the Ward family donated the Establishment to the University of Rochester. Since then, Ward's has been converted from museum supplier to science education supplier, enjoying prosperity throughout the twentieth century. According the the history section on the University of Rochester Archive page describing Ward's, the company was purchased by Science Kit in August of 1980, and continues to be a "leading educational supplier" today, with operations in Henrietta, NY.

Ward's has been criticized and protested by local and national animal rights groups. An undercover investigator from

PETA infiltrated the company, where they videotaped employees injecting live animals with formaldehyde. The video

Classroom Cut-ups features some of this video footage. Watch it on

the famous elephant, of the Barnum & Bailey Circus. Jumbo is now for the most part contained in a jar of peanut butter.