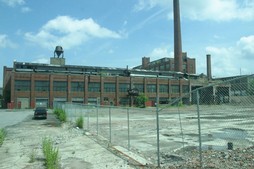 The remains of the Delco plant - photo by TomMaszerowski The abandoned Delco Plant is a massive structure on Whitney Street severely damaged by arsonists on June 20, 2003. The most heavily damaged parts were torn down but other sections remain and are in very poor condition. Fires continue to be set there periodically and the Rochester Fire Department has a standing policy of not entering the building to fight fires unless there are lives in danger. Police are known to respond to tresspassers on this property but this does not seem to be enough to keep people out. As seen in the photo, a new fence surrounds part of the property but numerous entry points were visible.

The Delco plant was near the Lyell Avenue stop on the Western section of the Rochester Subway that ran to the other GM plant (now Delphi) on Lexington Avenue. It was originally built to manufacture water-pumping, gas and electric plants for rural customers but, renamed as Delco Appliance, also began manufacturing fans, air conditioner motors and oil burners in the 1930s. A change to exclusively manufacturing automotive electrical accessories happened in the 1950s.

February 25th 2011 - a 3-alarm fire occurred on the third floor of the building.

DELCO (Detroit Eleictic Light Company) division of GM plant at Lyell and Whitney extending to Broad originally manufactured electric motors for vehicles, and expanded over time to manufacture oil furnaces, refrigerators and other electric appliances such as vacuum cleaners and fans for homes and offices. From the beginning a large part of shipping and receiving was by rail, with an inside loading dock that could accommodate 20 boxcars, all loaded and unloaded by men prior to forklifts at the end of World War 2. Truck docks accessed from Whitney Street only appeared after 1950. Manufacturing continued into the 1960s there for GM. The decision had been made in the 50s to expand Delco Rochester, and a new one story plant was constructed on Lyell Ave from the railroad to Alvanar Road.

The GM owned plant on Mt Reid and Lexington was Rochester Products where fuel systems were manufactured.