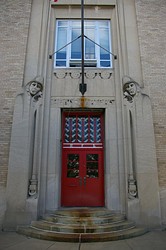 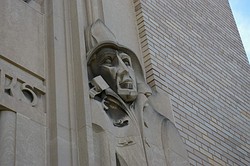 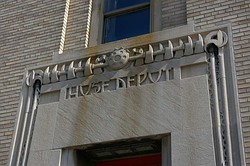 The Rochester Fire Department is a professional fire department tasked with ensuring the safety of those living, working, or visiting the City of Rochester. As of 2008, the Fire Department fields 10 Engine Companies, 4 Quint/Midi Companies, 1 Heavy Rescue, and 4 newly reorganized Truck Companies to complete this task. These companies are housed in 15 firehouses strategically placed throughout Rochester. The Fire Department employs over 500 firefighters and officers who are split into 4 shifts.

In May 2008, the Department began a restructuring to move away from the Engine and Quint/Midi system to a more traditional Engine and Truck model. Over the four year transition, the Fire Chiefâs Office and City Hall will monitor data to ensure this change is in the best interest of the citizenâs and firefighterâs safety.

The downtown firehouse on Andrews St. and the former Maintenance and Communications buildings, located across the street, are beautiful examples of Art Deco design, built in 1936. The Rochester Fire Department made their own fire engines in the Maintenance building during the 40's and 50's.


2014-06-11 05:57:21   I am researching a story. I delivered the morning newspaper to the Gardiner Ave. fire house about 1965-1970. I recall the hook and ladder truck was in a collision at Glide and Maple. A family was killed and the tractor was totaled. The station had a matched pumper and ladder trucks, modern for the time with buff over red paint. After the accident an older Pirsch, solid red tractor was mated to the red/buff ladder section. This hybrid combination was always odd to see and reminded me of the accident.
On Route 104 just east of the Monroe Orleans County Line Rd. is a dilapidated junk yard. Visible along the north side is a 1950's vintage solid red Pirsch hook and ladder vehicle. The door has a patch of less faded paint where the RFD badge had been mounted.
In the trees and weeds just west and behind it, not easily visible from the road is another hook and ladder truck. The tractor is a red 1950's Pirsch. The ladder section does not have the Pirsch name on it and appears to be buff over red paint scheme.I believe this is the Gardiner Ave. hook and ladder. I recently took some photos of both.
What I am asking for; are these facts? I have been unable to verify them. I was 10 -14 years old and may not remember the story correctly.
One additional question is, what became of the damaged tractor?
The junk yard and the solid red hook and ladder are visible on Google maps at 9926 Ridge Road. If you place the map man by the driveway, you can see the red/buff truck to the right of a small white building. Colors are hard to see because of the rust.
I am also contacting the Rochester Public Library for information.
Thank you in advance for any information you may be able to provide.
Thank you for your service.
Sincerely,
Dave Connor —daveconnor

2015-03-21 19:32:31   Hi Dave Connor, my name is Mike McDonald. I also remember that acciden . It was in the fall of 1968, if I recall correctly. My brother Chuck was just getting on the police department around that time at was at that scene. I remember they put the bodies of the victims at the old minute man gas station that was there. Believe it or not, I was three years of age and I remember it very well. I was with my mother inside McGowens bar because it was raining and we watched it from inside ther . I grew up on Mcardle street —MichaelMcDonald