Art Deco is one of many architectural styles found in the City of Rochester and the surrounding area. First appearing in France shortly after World War I and flourishing in the 1920s-30s, Art Deco has been described as "an eclectic style that combines traditional craft motifs with Machine Age imagery and materials. The style is often characterized by rich colors, bold geometric shapes, and lavish ornamentation." The following buildings in Monroe County are great examples of Deco: 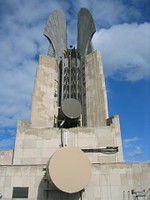 Orgone accumulators are the name we've given to a common feature of Art Deco,

Raygun_Gothic, and other modernist buildings. They are structures, usually regarded as decorative, that attach simple geographic shapes to a building in unconventional ways. They typically feature a futurist or even science fiction aesthetic.

The most noticeable local example are the Wings of Progress on the Times Square building, but less prominant ones can be found on the facade of the Reynolds Arcade or Spot Coffee. They can also be seen and on newer buildings like Tinseltown.


2010-11-23 17:27:17   Just because something is Art Deco, you now say it is an "orgone emitter"??? Do you have some documentation stating that the Times Square designs are really "microwave emitters"? Personally (and with all due respect)-speaking only for myself-This sounds like paranoid bunk to me. —PeteB

2010-11-23 18:01:36   I think the person that wrote this page was identifying these structures as "orgone accumulators" specifically because they are decorative structures that serve no real purpose, which is in line with the idea of "orgone" which, if you read the wikipedia page they linked to, is obviously of somewhat dubious origin and doubtful purpose also. It's funny that the page is titled as an accumulator, which makes one think of a receeiver of some kind, however the photo (one of mine, by the way) is captioned as "emitters" which would be the opposite of a receiver. In any case, regardless of your feelings on "orgone", those round discs that you see towards the bottom of the photo are, in fact, really microwave antennas, so at least he got that part right ! Pete, I think perhaps you have taken this entry a bit too seriously :-) —DottieHoffmann

2010-11-23 20:17:12   Good catch. The drums could cover either receivers or transmitters, though I'm reasonably certain they're working on microwave frequencies. I labeled the other an emitter based on its surface area. —jondaggar

2014-07-13 12:45:03   I'm not sure this is a real thing. I find no references to building exterior art deco design on that Orgone link. Doing a Google search for "Orgone Accumulators" or "Orgone Accumulators art deco" doesn't really show any reference to buildings, either. Doing a search or "orgone emitters" shows this page as one of the top results, hinting to me that it doesn't really exist elsewhere. —badfish