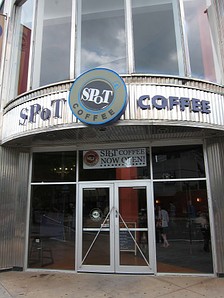 SPoT Coffee is part of a Toronto-based micro-chain of cafes and coffeehouses. Other locations can be found in

Buffalo (one on Delaware and one on Elmwood), downtown Toronto,

Rochester's SPoT Coffee is located next to the Little Theatre in the East End. The building was previously home to Hallman's Chevrolet and has massive windows spanning the front, allowing ample light to come in during the winter months. It is Art Deco in style and includes Orgone Accumulators. The space is open but effort was made to differentiate seating, such as a cordoned parlor with couches and armchairs, traditional cafe tables, and a wooden bar area. The second floor is a balcony stretching nearly the entire wall.

SPoT occasionally hosts live music, usually on Wednesdays and Sundays. The acoustics are interesting because the sound bounces around in the large space and some types of music (like solo saxophone or solo guitar) sound better than other types (like a band with a complete drum kit).

SPoT is also available for business meetings or social functions and offers free WiFi. It is easily sectioned off to host any type of event. Catering is available. Call for menu options.

Students with the Rochester Every Day sticker (R.E.D.) receive 10% discount.

SPoT Coffee roasts their own beans at their roastery in Buffalo and have whole beans for sale. They offer coffees from around the world but no "flavored" kinds, as per company policy. The tea is an extensive selection of bagged Republic of Tea varieties. The food consists mainly of various focaccia bread sandwiches, baked daily in the store, including the popular chicken focaccia, a sundried tomato and pesto chicken creation with mozzarella. SPoT also serves salads and wraps, along with eggs and omelets for breakfast every morning.

SPoT Coffee was closed for renovations from October 13, 2010 to May 26, 2011. During this time a wall was built which divides the former space into two halves. The half on the right (furthest from the corner entryway, where the fireplace is located) is available for rent as a separate business space. The remaining half contains the renovated SPoT Coffee. The full upper balcony area remains part of SPoT and overlooks both sides of the new wall. The antique furniture and old couches and chairs have been replaced by new contemporary furniture. They now serve pizza as well as all their previous menu items.

In February 2014 Spot Coffee Ltd. announced that it would be franchising its Rochester and Buffalo locations.