Ballantyne Bridge is a bridge that crosses the Genesee River at the westernmost end of Jefferson Road in Henrietta. In the time-frame from mid 2004 to early 2007 it underwent a major reconstruction as described in

this 2004 Press Release from the NY state Governor. 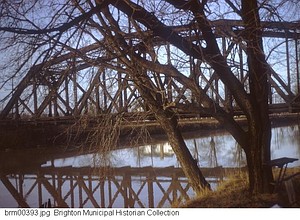 The original two-lane Ballantyne Bridge. It was replaced in the 1960s. Picture taken January 12, 1950. History
The bridge was originally built as a two-lane 212 foot bridge in 1913. In the 1960s, it was replaced with a four-lane bridge.

Construction Update:
It appears that major construction of the bridge is finished. Essentially, the old bridge was combined with a newly constructed bridge to make a much wider bridge with dedicated turning lanes.