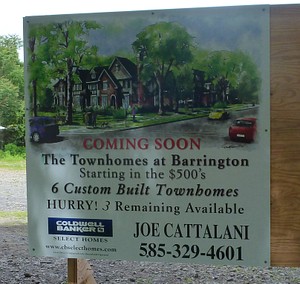 Barrington on the Park was the name given to 3/4 acre plot of land on the corner of Park Avenue and Barrington Street, behind the Park Avenue Green. Six Tudor style condominium townhouses are being built here, with prices around $500,000.

Initially, the development was opposed by many in the neighborhood, and the developer ran out of money after the housing market crash of the late 2000s. The project was considered dead for several years.1 However, the lot was eventually purchased by another developer and as of June 2014, construction is underway.