Chester Carlson invented the process of xerography, a method of duplicating images using electrical charges. He was inspired to work on this invention after spending hours hand-copying lab documents at the office in which he worked. Naturally, this was a pain in the butt, so he sought a way of automating the process and after several years of trial and error, had success on October 22, 1938. But, it wasn't until 1942 that Carlson thought it marketable (and patentable), and it was still another five years before Haloid purchased the rights to use the technology. These long years are documented in a Xerox film called "The Invention Nobody Wanted" (which I haven't had a chance to watch yet, but it certainly sounds dramatic! -H). After the 1940's, Carlson stayed on at Haloid in an advisory capacity, but inventing was his true passion. 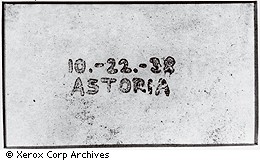 ...the first copy he made

He was born in Seattle in 1906 and moved to Rochester after developing and patenting the electrophotography technology at the center of the copier while living in New York City.

In his later years he became known for his generous contributions to the University of Rochester and Rochester Institute of Technology. Chester's legacy lives on at the Carlson Metro Center YMCA, the Carlson Science and Engineering Library at the U of R, and the

In a somewhat useless side note, I work in the Xerox Historical Archive and we have a sealed-up box that contains Chester's lab equipment, along with his prototype machines. I think this is really neat! At 12, he was quoted to have said, "Someday, I'm going to make a big invention" (we have this quote engraved in a plaque on the wall, because we are a little nuts for Chester. He's the patron saint of the library and archive). -Heather