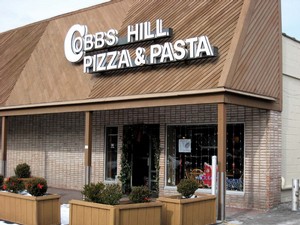 Cobbs Hill Pizza & Pasta was a restaurant located in the same plaza as Wilson Farms on Park Avenue. Menu had pizza, wings, subs, and a variety of Italian food. Eat in, take out, or delivery. Outdoor seating was available. Closed some time in 2016. A new restaurant called Bistro 630 will open in its place.

2007-03-25 23:58:55   I agree with just about everything MisterElkington said. Pizza is a little greasy but very good, wings are good, and service is friendly. —StevenDibelius

2007-03-28 18:43:26   I wasn't very impressed, maybe because it was a late weekday night but it was the worst pizza I've had in Rochester and I'm a "even bad pizza is good pizza" kind of guy. The service was good and the speed was decent. —TravisOwens

2007-09-20 13:38:20   I've eaten here quite a few times, most recently last night. I normally don't order pizza, because the nice thing about Cobbs Hill is the variety of the menu. Normally the food is okay, not really good, but not bad either. A good place to eat if you're doing laundry at the laundromat next door! —SaraChristine

2008-03-21 11:46:30   I went here recently for a cheeseburger bomber. It was good but not quite as good as I remember. There were a couple peppers on it, maybe from the meat sauce? Anyway, the girl who took my order said it would be "10 -15 minutes". I said are you sure because I have to run. She said yeah. 20 minutes later I asked how the my sandwich was doing. She went into the back and they got all quiet. (You can hear the kitchen staff from the waiting area and that 15 seconds was the only 15 seconds they were quiet the whole time I was in there.) She said he was just "pulling it out" right now. Funny since it wasn't something you put in the oven. 10 minutes later, which is 30 minutes after I ordered it, I got my sandwich. I suspect they forgot to do the order and started it when I asked her about it. —BadFish

Great if you are in a hurry, have an Italian fix, and on Park Ave. —MrRochester

The pizza is toward the low end of the spectrum (I think of Salvatore's as 'average' for Rochester). The sauce has the flavor of Campbell's tomato soup. —ZachSmalt

2009-03-21 14:19:34   Never had any problems with Cobbs Hill except for the poor attitude the staff gives off. The food is generic but does the job. Until recently I would go back, but I received the most absurd statement from an employee when placing a pick-up order. I asked for mostly homefries and a little bit of mac salad on my garbage plate. Usually people get half and half but I like 3/4 homefries. This was too much math for this man to fathom and apparently he was going to make me pay $2.30 extra for the little bit of mac I asked for. I will never return, apparently the owners don't teach their employees basic business standards, the employee is always right, and I wasn't even making a bogus request. SO for the selfishness and anger of this man, they received this nasty post. I will never return, not because I have seen workers handling food with no gloves, but because of this act of poor business management. —JonSmith

2009-08-07 14:06:20   I've been getting pizza from CHP since they were in their old location on Monroe (where New Ming is located now) and I've always loved it. The pepperoni is definitely greasy but I always order it anyway because it's that good. As for their sauce tasting like tomato soup, couldn't disagree more - I think that their sauce is what makes the pizza. Been taking my family there a few times a month for over a year now and regardless of what I order it's always good. It's my second favorite pizza, right behind Pizza Stop. —RichardSchreiber

2009-11-04 16:58:34   So, I decided to give their pizza a try even thought the reviews weren't great and the Pizza Blog Guy also didn't give them a great review. I thought the Pizza was excellent. There was no greasy bottom as the Pizza Blog noted and the buffalo chicken pizza was GREAT (the best in rochester). Can't wait to go again. —meghanoo

2016-10-14 09:02:45   It's now Bistro six30. I don't know if it's under new ownership or not. Reviews online are good, although a very very small sample size. I've walked by the place a few times and it hasn't looked busy, unfortunately. They don't seem to have any online presence. —DE