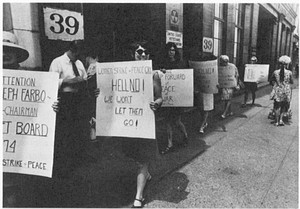 News Photo - Protesters The Flower City Conspiracy was the name of a group and an event in the 1970's Vietnam War protest era of Rochester's history. On September 6, 1970, the offices of the Selective Service, F.B.I., and the U.S. Attorney were ransacked during the early hours of Sunday morning. The eight young people involved identified themselves as the Flower City Conspiracy.

The F.B.I. knew of their plans long before the break in, detailed information coming from an existing wire tap on one of the members. All eight members of the conspiracy were convicted.

See the full story and the context of the times in