The History page provides a chronology of the rich and wonderful history of Rochester, NY.

A broad overview of the greater Rochester area may be found on the Genesee River Valley page. Also consult our Landmark Society page for more information on touring or learning more about Rochester landmarks. 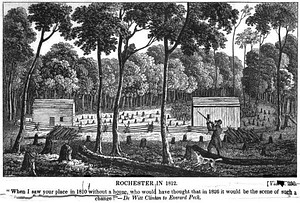 Below is a time-line of significant events with summaries and links to further reading on RocWiki.

Prior to Rochester Settlers

As described in the Vingage Views Timeline 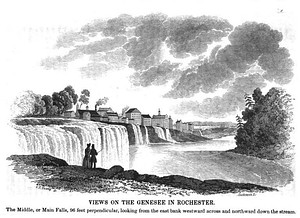 As described and depicted (picture right) in 1838 publication and from other referenced sources.

"Settlement in the West: Sketches of Rochester" By Henry O'Reilly in 1838. This 300+ page book is filled with important details of the early days of Rochester. 2