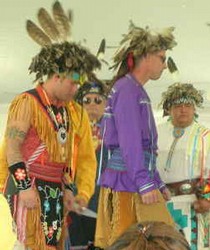 Seneca ceremony. Photographer: Judith Gavin. The entire space occupied by Rochester and its suburbs, along with much of the land south and west to

Lake Erie, was formerly occupied by the

Seneca nation. The name of the river is actually derived from the Seneca language and originally meant good valley or pleasant valley. Well populated at the time, this region was considered the breadbasket of the

Long the "Wild West" of the Americas, one of the earliest Europeans to visit this area was

Robert de La Salle on his quest for the Ohio River and the Western Passage, who while widely memorialized in Buffalo and Quebec, is not recognized in Rochester. This is peculiar, as he would have had extensive dealings with the Senecas in order to navigate the Genesee River, which features a number of waterfalls and rapids and the surrounding land, which would have been rather densely forested at the time, with the exception of the well established Native American trails (many of which would become major roads much later, most notably, routes 20, 33 and 104. 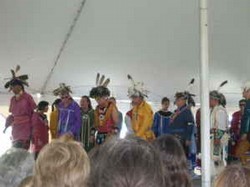 French and Indian War of the mid-eighteenth century and the American Revolutionary War (largely on the side of the British loyalists).

It was not until the late eighteenth century, however, that this area became populated by Europeans and their descendants for non-military purposes. The forts and trading posts eventually developed surrounding villages and traditional Seneca trading posts, including the area now known as Brooks Landing and the communities of Portageville and Bristol were razed and/or supplanted. In their place, Americans created small farming villages.

Because of its prominent water falls, Rochester developed a milling industry. The surrounding area, later designated Greater Rochester Area, however remained largely agrarian, which can be seen to this day, particularly if you follow the Genesee River south of the Rochester area into

Allegany County. There, you can also seem some of the remnants of the dense forests that La Salle must have seen, as well as experiencing the remoteness of the villages and (far more numerous) hamlets, where one may reasonably expect to have to drive more than 20 miles to find a grocery store.

Due to the predominance of maple trees in much of New York, a significant amount of

maple syrup is harvested each Spring and is available for purchase at local farmers' markets. Hunting is also a popular recreational activity (and for some, a source of food) in the rural portions of the Valley. Common game are deer, wild turkey, goose, duck and fox.

Much of the valley is a product of the last Ice Age. The current river is actually the western branch of the preglacial river system and extends as far south as northern Pennsylvania and empties into Lake Ontario at Charlotte.1

Letchworth State Park occupies a significant portion of the valley and has an additional three waterfalls of its own, including the highest waterfall in New York State.

There is also a minor geologic fault on the western fringes of the river valley. While it has never caused more than minor damage, it is still active. 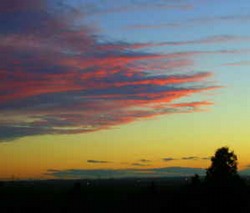 Much of the river valley is rural. Photographer: Judith Gavin.

It should be noted that while agriculture dominates the landscape, it is rare to find something resembling your traditional family farm. For example, driving down the back roads of Livingston County, you will see many fields of corn, each designated with a commercial tag, indicating that they correspond to specific (likely GMO) seeds. These crops are then harvested for their seeds, which are then re-sold to farmers and consumers alike. An alpaca farm in Bloomfield has over a dozen young and even offers tours and a gift shop to visitors.

Curiously, you are most likely to find "traditional" family farms in the outer-ring suburbs of Monroe County, like Penfield, where plots of land are too small for intense commercial farming, but are sufficiently large and expensive that a small farm operation offers considerable tax advantages.

Towards the eastern end of the valley, and even beyond, into the Finger Lakes, one finds many, many vineyards. These are of varying age and quality. Wine tours are, of course, recommended, but keep in mind that most vineyards take 30 or more years to truly establish themselves.

And if you're wondering what the dairy farms are for, they're likely for

Upstate Niagara (producers of Bison and Upstate Farms brand milk and dairy products) or either of the two major brands of cheeses produced in Western New York,

Cuba, both of which are cheddars.

The Genesee River Valley cannot properly be thought of as having a single cohesive market.

North of what is now Route 20, the economy is largely centered around Rochester. A significant number of people twenty to sixty minutes a day from outlying communities to work in the city or its immediate suburbs. In the early nineteenth century, this area supplied much of the wheat that was processed by the mills. The Port of Rochester and later the Erie Canal and railroads were used to distribute this flour to the rest of the nation. By the end of the 1800's, the local market had largely transitioned to the production of decorative flowers. Much of what is now the University of Rochester and Brighton was used for flower farming.

In the late nineteenth and early twentieth centuries, significant industrial development occurred along what is now the border of Greece and Rochester, as well as along the Genesee River, north of Brooks Landing, where rough waters made the river impassable. By the 1960's, the city had over 300 thousand residents and was projected to become one of the largest cities in the nation. However, as with the rest of the

Rust Belt, the decline of heavy manufacturing and suburban flight took a significant tole on the city and now 80% of the metro population lives outside of the city. In the early twenty-first centuries, the major areas of employment are education, research and development and medicine.

South of Route 20, and particularly south of Geneseo, the communities are largely economically and culturally tied to Buffalo rather than Rochester. In Mount Morris and

Nunda, for example, you can purchase both the Buffalo News and the Democrat & Chronicle in convenience stores, but by the time you reach Allegany County, only the Buffalo News is available.

This area, while always heavy agrarian, formerly enjoyed far more industrial and commercial development than it does now.2 Until the mid-twentieth century, the region supplied Buffalo with raw food materials used in production, although the majority of production was still subsistence. During this time, significant industrialization, largely centered around milling and other food processing industries, developed. In the 1920's, RG&E dammed Caneadea Creek to form Rushford Lake. This provided plentiful and cheap power, supplementing the supply from the Beebe Station in Rochester. While this helped establish the area as a center of tourism (a mantle earlier adopted by Mount Morris with the formation of Letchworth State Park in 1906), it also had far reaching impact on the local economy. This process of negative economic growth was accelerated by World War 2, the rise of industrial agriculture and rapid urbanization of the twentieth century.