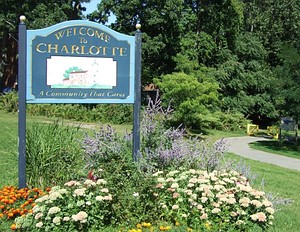 Charlotte (pronounced shar-LOT) is Rochester's northernmost neighborhood. It is best known as the home of Ontario Beach Park and the Port of Rochester. A major landmark is the Charlotte-Genesee lighthouse, built in 1822. It sat idle for nearly a century until its restoration as a museum by the Charlotte-Genesee Lighthouse Historical Society in 1984. The Latta-Meech House, meanwhile, is believed to be the second oldest building in the county.

Charlotte is unique in that it was originally its own village located in the Town of Greece. It was annexed by the City of Rochester in 1916 and known for many years as the 23rd Ward. At the time, it was a major summer resort known as the "Coney Island of the West." Even today Beach Road has many attractive waterfront vacation homes reminiscent of parts of New England. Turning Point Park remains a major destination for scenery, including a boardwalk trail across a swampy part of the Genesee River.

Lake Avenue is a major commercial street that runs along the Genesee River. A good way to get to Charlotte from downtown is to simply get on State Street, which turns into Lake, and continue in a straight line.