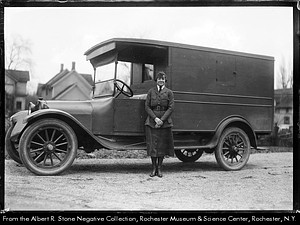 The Women's Motor Corps provided a delivery van for use as a temporary ambulance after the hospital's ambulance was wrecked in an automobile accident. c. 1918 On May 25, 1887, a charter was obtained incorporating the Rochester Homeopathic Hospital. It would take almost two years before Silvanus J. Macy, president of the hospital board, was able to lease an old sanitarium building on Monroe Avenue on the site of Monroe Square, the old Sears Roebuck building. Through a generous gift from Don Alonzo Watson, the building was purchased. The hospital was opened September 19, 1889, admitting its first patient, Thomas Peck, a surgical case.

The estate of Congressman Freeman Clarke at 224 Alexander Street was purchased on January 2, 1893. This estate consisted of the mansion and eight acres of land. The Watson family donated funds to erect a two-story wing (Pavilion) housing wards for men and women. The Sibley family donated a second pavilion to be used as private rooms for patients. Another gift from the Watson family provided a maternity building (South Wing).

In 1926 the hospital name was changed to The Genesee Hospital.

Excerpted from "The History of the Genesee Hospital" (