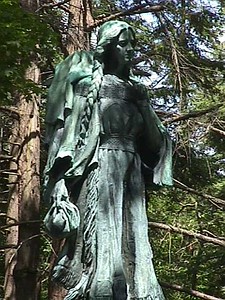 From Tom and Nikki Wedding Pages

Mary Jemison is an historic figure in the Genesee Valley Region. She was captured by the Seneca in 1758, lived among, them and was adopted by the Seneca tribe thereafter.

"She was initially buried on the Buffalo Creek Reservation, but in 1874 was reinterred at William Pryor Letchworth's Glen Iris Estate (now Letchworth State Park in present day Castile, New York. A bronze statue of Mary, created in 1910, marks her grave." 1

There was once a Mary Jemison tour boat, but it was retired in 2014.