Ice storms are a common problem across the Upstate NY Region. Here are some of the more memorable ice storms:

The Penfield Library has a VHS copy of news footage covering this storm. Many were without power for 1-2 weeks. The Massaro Sculpture Garden was inspired by the debris left in a local artist's yard. Over 14,000 trees were destroyed and had to replanted over the next four years. 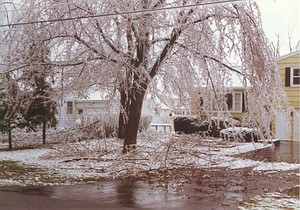 Our front yard. Photo taken in March 1991 by Adrienne Dahler 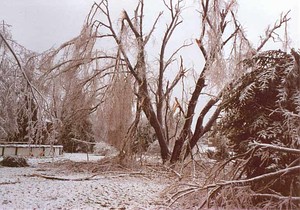 Our back yard. Photo taken in March 1991 by Adrienne Dahler

A surprisingly early ice storm hit the Buffalo area in October 2006. Its official name, given by the National Weather Service, was "Aphid",1 though it has also been called many other names, such as "The Columbus Day Massacre".

The storm began in the evening on Thursday, October 13 and ended the following morning.

Watch an AP news video about the storm