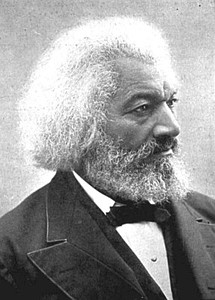 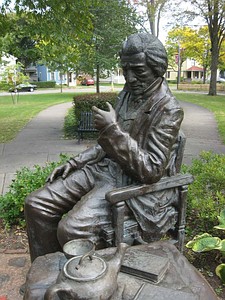 Detail of Douglass from the statue in the Susan B Anthony neighborhood, 9 - 2008

Frederick Douglass is a famed abolitionist, human rights advocate, speaker, editor, and author. He moved to Rochester around 1843, where he embarked on a second career as a newspaper publisher. On December 3, 1847 his four-page weekly newspaper, the North Star started rolling off the presses. As an anti-slavery publication, published by an ex-slave, its initial reception was cold. The New York Herald went so far as suggest that people rally and dump his presses in the Genesee River. Over time, however, Rochestarians came to support the paper.

North Star later merged with the Liberty Party Paper to form Frederick Douglass's Paper. He made his home on Alexander Street, and then later South Ave. His skill as a speaker was so great as to fill not only the A.M.E Zion Church but also Corinthian Hall, where he brought the National Negro convention to Rochester in July of 1853. His efforts helped to make Rochester a focal point in the struggle for the abolition of slavery.

Sadly, following an unexplained fire that destroyed his home in 1872, he broke his ties with Rochester and moved to Washington.

One of his most famous speeches, What to the Slave is the Fourth of July?, was written and delivered in Corinthian Hall in response to being invited to speak at one of Rochester's Fourth of July celebrations. You can listen to

this Learn Out Loud mp3 the speech for free.

He is buried in the Mt. Hope Cemetery, and they have maps and information on how to find his grave site. Two years after his death he was honored with a statue, and was the first black person to have a statue raised to him in the U.S.A. That statue still stands in the Highland Bowl.