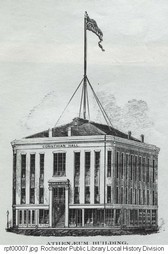 Credit: Rochester Public Library Local History DivisionThe Corinthian Hall had been the premier lecture hall of our city. It hosted many noteworthy speakers including: Frederick Douglass1, Susan B Anthony, Ralph Waldo Emerson, Charles Dickens, William H Seward, and William Lloyd Garrison. The building was constructed in 1849 by the Rochester Athenaeum and Mechanics' Association, led by William A Reynolds with Henry Searle as his architect. It was originally to be known as The Athenaeum, but Reynolds chose to change its name the day before its christening to reflect the Greek Corinthian columns that were positioned on stage. The building was later renamed The Academy of Music. Fire ravaged the hall in 1898, but it managed to reopen in 1904. It was then later torn down in the year 1928. A parking area was erected in its place.

In 2020 the Rochester Fringe Festival commissioned a 10-minute podcast,

"From a Parking Lot", about the Hall.

Folks, if I can add to the misery, Corinthian Hall was the locale of the first public demonstration of the Fox Sisters and Spiritualism (the world-renowned "Rochester Rappings") in 1849. From this very place, their fame and their following, which exists to this day, were born.

In July of 1851, on her tour sponsored by P.T. Barnum, the famed Swedish soprano Jenny Lind gave not one, but two concerts in Corinthian Hall, such was the crush of Rochesterians who wanted to hear her. She performed a program of bel canto, including Bellini and Donizetti, as well as an aria from Handel's Messiah and some Swedish folk songs.

Barnum himself gave a lecture in the hall a few years later, with all of the proceeds going to the Female Charitable Society, an early and active women's group, founded in 1822.

What it would have been to be like to be in the audience of a "Grand Vocal and Instrumental Concert" which took place in Corinthian Hall on Tuesday evening, December 26, 1854, and to hear one "H. Schenk" lead a Grand Chorus in "The German's Song" by one Kalliwoda, as well as music by Mozart, Mendelsson, Bellini and others! "An accomplished Lady Performer will preside at the Piano." A member of Jenny Lind's entourage, Henri Appy, settled here in 1866 and formed the first professional orchestra, the Philharmonic Society, which made Corinthian Hall its home.

In addition to being the seed for RIT, the Rochester Athenaeum and Mechanics' Association's large library which Corinthian Hall housed merged with the Rochester Public in the early 1930s, significantly adding not only collections but financial resources. Until the building of the Bausch and Lomb Public Library in 1997, for instance, a good bit of the Arts/Music and Recreation Division was called the "Reynolds Audio-Visual Department."

The loss of this structure is incalculable. GerrySzymanski