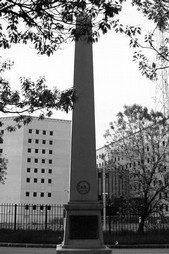 Obelisk remembering the Fox Sisters still stands in downtown today. The birth of American Spiritualism becomes forever linked to nearby Hydesville, New York when sisters Margaret and Catherine Fox claim the ability to communicate with departed spirits through a code of knocks and rapps heard through the walls of their home. While living on Troup Street in our city in 1849, they perform a public hearing at the Corinthian Hall1, where several of our areas learned men are unable to detect the means of their trickery, which in turn leads to word of their abilities spreading throughout the world.

The sisters are commemorated in our city by an obelisk that stands near the point where Plymouth Avenue crosses Interstate 490.