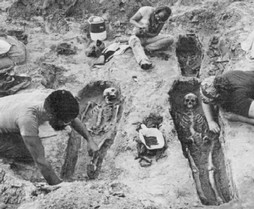 RMSC investigators excavate grave site. Image credit: cropped copy of photo by Michael Schwarz from the Times-Union Every spring Rochesterians gather for the Lilac Festival in Highland Park, blissfully unaware of the history contained in the grounds they tread. That there had once been a Penitentiary centered on that land is news to most, as is the Almshouse and Insane Asylum that followed it down South Avenue from Highland Ave. However, what was once on this land is hardly worth mention in comparison to what remains in this land.

From the late 1800s through to July of 1984 this location has had a history of turning up its past. Prior to 1984 the tacit method of dealing with the bodies found here was to return them to the earth1, caskets and bones: shattered, mixed, and indistinguishable beneath the lilacs. When a bulldozer disinterred six skeletons while landscaping Highland Park in 1984, and then later six more were uncovered by rainstorms, an excavation was called for and led by RMSC.

After just 22 days 305 graves were excavated. 296 were removed for relocation to Mt. Hope Cemetery, the remaining documented 19 were deemed to be buried deep enough so as not to be disturbed by the ongoing landscaping. However, the excavation performed by RMSC was far from complete. Test holes and analysis of the soil have shown the cemetery encompassing a far greater perimeter than taken into account by the scope of the excavation. Tread lightly. 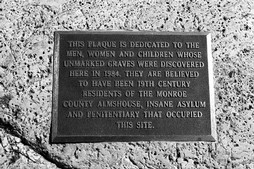 Memorial plaque as it exists today. The source of the bodies is believed to be from the Almshouse originally located on nearby grounds. No formal records of the burials exist, let alone a name for the cemetery, and the burial period arrived at by RMSC simply seems to have been pulled from a slim record of deaths at the Almshouse beginning and ending the years the state required its existence. It is also worth noting those records only cover 251 deaths, not accounting for the 305 confirmed graves, and what many more may lie beneath the unexcavated portions.

It has been estimated that somewhere in the range of 600 - 700 bodies remain.