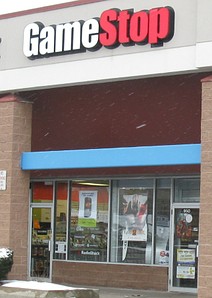 GameStop is a national chain video game store with

15 or more locations within the greater Rochester area.

2007-05-27 18:28:45   {magazine}... for only $15 that also gives you 10% off used games and an additional 10% credit on trade-ins if you use it as store credit. This membership is well worth it's cost for the insider access this super chain has for the game industry and it pays for itself if you purchase two used but recently released games.—TravisOwens

2007-05-27 19:28:45   They have decent used game prices and their trade in values aren't too bad. Their magazine is possibly the best video game magazine on the market, and they get loads of insider info that you don't find on the web, along with lots of unique in game pictures. —TravisOwens