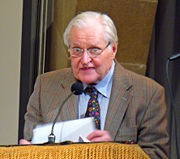 John Ashbery (1927-) was born in Rochester, NY and raised on a farm near Lake Ontario. His father was a farmer and his mother a biology teacher. His first ambition was to be a painter and from the age of about eleven until fifteen he took weekly classes at the art museum in Rochester.

Deerfield Academy. His writings appeared in Poetry, the most illustrious poetry magazine at the time. Ashbery studied at Harvard, Columbia, and New York universities. In 1949 he graduated from Harvard; two years later he received a master's degree from Columbia University. After working in publishing, he moved to France in the mid-1950, just before the publication of his second collection of poems.

Ashbery spent ten years in Paris, most of those spent living with the French writer Pierre Martory. He studied on a Fulbright fellowship and was the art editor for the European edition of the New York Herald Tribune. Ashbery's second collection of poems, Some Trees (1956), was chosen by the poet W.H. Auden to be included in a Yale University series of modern poets. In 1965 he returned to the US. He worked as an art critic for New York and Newsweek magazine. From 1965 to 1972 he served on the editorial board of ARTnews and then worked as a creative writing teacher in Brooklyn College and as the Professor of Languages and Literature at Bard College. From 1976 to 1980 he was an editor of Partisan Review. In 1989 Ashbery's writings on art were collected in Reported Sightings.

Bollingen Prize and in 1985 a MacArthur Prize fellowship.

" 'No figure looms so large in American poetry over the past 50 years as John Ashbery', Langdon Hammer, chairman of the English Department at Yale University, wrote in 2008. 'No American poet has had a larger, more diverse vocabulary, not Whitman, not Pound'. Stephen Burt, a poet and Harvard professor of English has compared Ashbery to T. S. Eliot, the 'last figure whom half the English-language poets alive thought a great model, and the other half thought incomprehensible'."1

From They Only Dream of America: