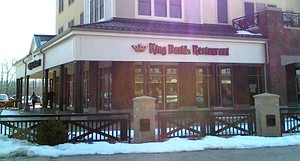 View from the Park Point at RIT courtyard

King David's Restaurant was a restaurant serving Middle Eastern, Lebanese Food and Greek cuisine. It opened its only Rochester location in 2008 and closed in 2010.

The restaurant was located at Park Point at RIT. The other locations in Syracuse and Fayetteville are still open.


2008-10-18 16:51:24   Had lunch here today. The restaurant is full-service at night, but for lunch you order and pay at the counter and they bring their food to you. We had the lentil soup ($3.50) which was delicious, served with a generous sprinkle of mint.. and the chicken salad (around $7) which was also great - fresh, warm, moist chicken, nice creamy greek dressing, and served with a generous portion of warm pita. Service was lightning fast. Next time I'll try the mediterranean meza for two - the people after us had this smorgasbord of appetizers and it looked great! —GreenBrenana

2008-12-04 13:09:10   Had dinner here last night. Service was prompt and friendly. Chicken lemon soup with orzo could have used more lemon and less salt. Falafel was above average. Tzatziki dressing was very good... big chunks of cucumbers in it. —JasonHaremza

2008-12-16 12:19:00   Location is great for the RIT crowd. In all honesty, the food was no different from Alladin's or Sinbad's. Seating arrangement is okay and you have lot of room. Can't say the same with other Middle Eastern restaurants. Service can be better, i want a authentic restaurant so i want to be served by a Middle Eastern waiter, not by a blonde American (no offense). The prices are reasonable and the portions are very good in size, you get plenty for your money. Me and my girlfriend got Gyro meal, and it was okay, Gyra supposed to super thin and unfortunately some pieces were really thick. My girlfriend got a piece of baklava and it was awful. I recently had a baklava from Turkey and that was amazing, but this one that we had at King David's was horrible. It was very dry and the it had cinnamon in it? Who puts cinnamon flavor in a baklava? Its a big no no. I didn't care for the music either, i would prefer to listen to slow moving new age and instrumental Middle Eastern music. I think the concept is a hit and miss. I think the owners were not sure whether to do the restaurant a hip elegant place or a fast food restaurant. It kind of feels like its both casual and fast food, which i don't think it works out well. Overall, if you are in the area i would recommend you checking it out. Like i said before, restaurant and the concept is very similar to what other Middle Eastern restaurants in the area have. —DennisPtak

2008-12-16 13:09:54   Baklava has many regional variations. Some call for cinnamon among other things, and I have had many "authentic' versions with it. However, I have not had the KD baklava, so perhaps the quality is not high. —RxScabin

2009-01-01 08:48:14   Excellent, I think it is the best in this area. Prices and portions were good. Fast service nice setting. I wish they ad some seafood. Baklava was good not the true greek baklava though. —chuckk

2009-01-01 12:34:19   Great place! Our whole family loves King David's. Nice vegetarian choices, great hummus, interesting variety of middle eastern food. Wine list is weak (they need at least one good red by the glass), and service is spotty (some waitresses are fine but one of them needs to pay much closer attention to her job). Still, we find ourselves trekking out to RIT at least once a week or so to enjoy this great food at reasonable prices. —LeGrandChien

2009-01-23 19:15:09   Did I actually read someone with the complaint that the wait staff was white? ROFL. What a joke. In all honesty, this restaurant is pretty good. It's much more "classic" Mediterranean food than Sinbad's. The meat can be a little dry at times, but with enough sauce, you wont notice much. The falafel, bar none, are the best I've tasted in Rochester. Much crispier than most. Hummus is also top notch. Portions are a bit small, but the prices match them so it's not all that bad.
Outside of the food, restaurant is a bit corny looking and bland, it looks like the owners raided a pawn shop and took all the remotely Mediterranean items they could find and put them in the shop. Also, they serve you on trays, so it's certainly not a high quality restaurant. But for the RIT "Let's grab a bite for an hour between class" crowd, this place is heavenly in terms of taste. —NoahLeaf

2009-02-08 21:01:09   It's a tough call whether King David's or Sinbad's is the best Mediterranean food in Rochester - Sinbad's wins for ambiance, but King David's has lower prices. For only $8-$10 you can get a warm pita or pocket sandwich, salad, hummus, and falafel! I think the portion sizes at King David's are perfect, (that is, at least if you order a platter). And the chawarma is absolutely amazing! —AJH

2009-05-19 13:12:30   you ppl really need to know what Greek food taste like before you say what is better ,i am born and raise in Greece and after experiencing different places alladins and sinbads are by far the worst.King Davids and Astoria i have found to be the most authentic —G.Soklaropoulos

2009-06-14 17:19:33   Casual restaurant - there isn't much in the way of ambiance. The food however is good. I especially enjoy the Chicken Kabobs, Falafel and Spanakopita. The calamari is delicious as well. Service can be spotty - I have had a couple of rude servers there. The prices are reasonable. One of the better Mediterranean places in Rochester. —OneLove

2009-07-13 02:27:50   I've gone here a couple times and all I can say is order your sauces on the side. They can go a little overboard with them. The service has always been nice to me so I can't complain. The portions are big and the price is good. A great addition to Henrietta. —AlexMikado

2009-11-25 11:14:22   If you are more concerned about the food then the ambiance , this is a place to go. While I still think Sinbads has the edge I would have no problem returning here. Had Lentil soup and Mousaka and thought both were very good.My wife bad a Kabob dinner and thought it also was very good. Service was fine and I thought prices about right.Pizzas looked good, would probably try one next time. —almorinelli

2009-12-27 18:32:07   Had dinner on 12/26 at about 6pm. Not only was it the worst "Greek" food I've ever had, it was the second worst restaurant food I've ever been served. We started with the stuffed grape leave appetizer - which were basically white rice with ground beef (sans any seasoning at all) wrapped in dried out grape leaves - I resorted to drowning them in Frank's Red Hot in order to choke them down. I had the "Greek Trio" which consisted of a heaping portion of flavorless mousaka, flavorless greek lasagna, and a spanikopita that looked like it was frozen, baked, refrozen, and microwaved — all before it had the misfortune of arriving on my plate. My wife had the Chawarma pita which was decent — if not for the meat — which was so overcooked it was like chewing leather. My wife and I were really looking forward to a great greek salad as well, yet the lettuce was brown and saggy. Greek food is hard to mess up, but this terrible excuse for a restaurant was able to. The only saving grace was our waitress who was very polite and attentive. Perhaps it was timing (the day after Xmas) that created this mess - but somehow I doubt it. —MarkFro

2010-04-30 10:55:10   I just heard that the Park Point location is closed, which is a real bummer. That location has also been removed from their website- looks like it's just the two Syracuse locations now. It's really sad that Park Point is losing so many places...I'm worried it's going to soon be a big empty eyesore (with the exception of the bookstore). —ShawnaLusk

2010-07-10 09:57:37   I'm very sad to hear the Park Point location closed. It was a favorite of my husband's and mine. Amazing falafel, baba ganoush... Great options for vegetarians (I was a vegetarian for quite a while, and tasty vegetarian options are not always easy to come by!) I hope they continue to thrive in their Syracuse locations, and they will be missed here in the ROC. —sarah