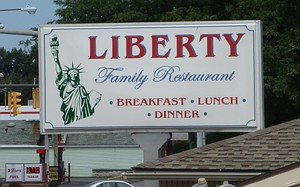 
2006-09-19 14:27:35   The Liberty is your typical family restaurant in that itâs basic and functional and maybe a little boring. Iâve been going there, on and off, since I was a kid. The food is consistently good and the staff always nice. Itâs located on the edge of Brighton with some nice neighborhood streets and shops near by if youâre up for a walk afterwards. —RickUrwin

2008-03-15 12:14:02   Went there twice. Second time there was a fly in my sandwich. GROSS. I think the waitress quit because after she gave us our check I saw her leave! never came back to cash us out. Needless to say... I will not be returning. —NewtonNola

2009-05-17 09:38:29   We live nearby and go there frequently. I agree that the food is consistently good and worth the price. The waitresses are always smiling and friendly and we often see many familiar faces. It's your typical neighborhood family diner with a nice relaxed atmosphere. It never gets overly loud and rarely do we encounter screaming ill-behaved children. We typically go for breakfast or lunch. I usually get the Liberty Special for breakfast which is two eggs prepared your way, two pancakes or french toast and two pieces sausage or bacon. It's just enough, but not too much. I also have to tout the sausage gravy! Now I'm hungry, so I think I'll take a walk down there right now - see you there! —PickleCelli

2009-08-05 15:34:49   typical family restaurant with the usual food. it does the trick when youre hungry and want something to eat and dont want to spend too much money. two of us had breakfast for about $12. —limeylimer

2011-03-06 12:19:09   Went there recently craving an open faced turkey sandwich. Although it was pretty good, gravy was a little to salty and the turkey was a little cold though. However, it was a nice place to sit down and eat, relaxed and quiet. Ill probably go back sometime. —MetalFrost

2011-09-18 20:34:07   Well, I ate at the Liberty today, and I have to say, after Jim's, I'm a little disappointed. The coffee was substandard, more like warm brown water with a little flavor thanks to the "sugar" packets I added. The food though, was not bad. The fries were crispy, but not crunchy (anyone who's burnt fries before will know what I mean), The Chicken was what you'd expect from the title "Southern Fried" and the coleslaw was neither dry lettuce nor soup, which was nice as most places are one or the other. The placement of the cranberry sauce - under a piece of chicken - wasn't smart, since I like mine slightly cool, and well, warm chicken+cranberry sauce=you can guess. They did have the Democrat and Chronicle, which I liked, and bought, but for $2.00? I got it because I still like to "read" the comics and do the jumble, but I'm pretty sure I could have gone to a corner gas station and bought one cheaper. Se la vie though. the total was definitely more than it would be at Jim's, but I suppose you're paying for the bigger restaurant as well as the food. All in all, I would rate the Liberty Family Restaurant at 6.5 to 6.7 on a 10.0 scale. they passed, but if I have a choice, I would definitely return to Jim's over the Liberty. —A.L.Silvertongue

2012-06-05 08:33:05   Pretty standard "family restaurant" (btw, is there anywhere else besides WNY where a diner is called a "family restaurant"?)...I'm pretty sure they had almost the exact same menu as Geneseo Family Restaurant, just changed the Liberty logo...My food was good enough, others at my table didn't like theirs..a solid "meh" from me —PDub