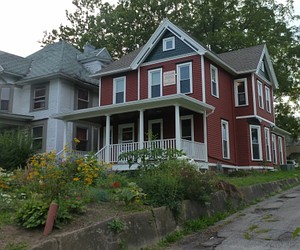 The M.K. Gandhi Institute for Nonviolence was founded in 1991 by the grandson of Mahatma Gandhi, Arun Gandhi, and his wife, Sunanda. The Gandhis provided seed money for the Institute through the sale of Gandhijiâs letters to his son and daughter-in-law (Arunâs parents), Manilal and Sushila. Sustaining funds come from contributions, publications, program fees, and grants.

Many of the Instituteâs educational programs are aimed at conflict prevention, anger management, diversity training, and relationship- and community-building. Currently, programs include the Alternative Spring Break, the interactive nonviolence and diversity-training workshop Faces In The Crowd, the annual Behind the Prison Walls prisoner essay contest, the international Season for Nonviolence grassroots community-building campaign, the Circle of Friends monthly public discussion forums, and others.

Arun Gandhi travels almost year-round all over the world speaking and teaching about nonviolence and promoting the work of the Gandhi Institute, and was accompanied by his wife Sunanda until her passing in 2007.

The Gandhi Institute is in communication with organizations dedicated to nonviolence worldwide. These growing communities of friends, students, and practitioners of nonviolence are forming a network of moral support for each other and fortifying the collective project of peacemaking all over the world. From Buenos Aires, Argentina to Bergamo, Italy to the Netherland Antilles, the Gandhis have brought the influence of Gandhian nonviolence and the Gandhi Institute. Here in the United States, new groups committed to nonviolence, and inspired by the Gandhis, have sprung up in Los Angeles, San Antonio, Chicago, Houston, Portland, Rochester (including student group Nonviolent On Campus (NOC), founded in 2006 at the University of Rochester 1), and many cities in between.

The Institute's research and work echo and affirm the prophetic nature of Gandhijiâs prediction: âUndreamed of and seemingly impossible discoveries will be made in the field of nonviolence.2

By late 2011, the Institute had outgrown its original home on the UR River Campus. In September 2011 they

announced plans to move to the Plymouth-Exchange Neighborhood to strengthen their ties to the Rochester community. They leased a former crackhouse that had lain abandoned for seventeen years and required extensive rehabilitation. The property also includes a 3/4 acre lot next door which the Institute plans on transforming into an urban agricultural park and meditative green space. The new Gandhi House was officially opened on September 30, 2012.

They haven't gotten the wheelchair-accessible ramp in yet but they're working on it. —EileenF

2019-12-12 23:55:55   The Gandhi House is wheel chair accessible. The back entrance is the main entrance to the Institute, and from there, the entire first floor can be accessed, which is where most public events are held. —ErinThompson