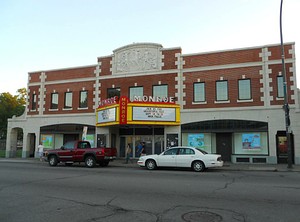 The historic Monroe Theatre's side with the American Flag

The Monroe Theatre was home to many things in its rich history, including an actual stage theatre, a single screen

Cinerama, and up until 2008, Show World, a local pornography store.

Many people fondly recall this theatre housing productions and films in their childhood and past. This included films such as

The Sound of Music,

The theatre opened in 1927 and was converted to a Cinerama in 1960. It still showed mainstream films until 1970, when it started showing pornographic films instead, which abated in 1995.

Show World closed the theatre in 2008, and rumors of the city having the building demolished have surfaced. The city was rumored to at one point purchase the theater in order to convert it to a performing arts house.

Demolition of the rear portion of the building commenced in September 2008. The front facade will be preserved as per court order.

The exterior has been painted in bold colors, neon, and black. This was purported to have been brought about when there was contention over the historical value of the building.

An American flag was added to the North facing wall after terrorist attacks in NYC on September 11, 2001. 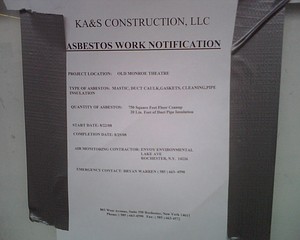 Despite some claims of an unfounded destruction of the theatre, the picture to the right was a work order found on the theatre in Sept. 2008. The work order itself was from 8/22/08. 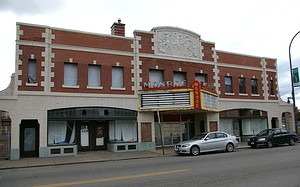 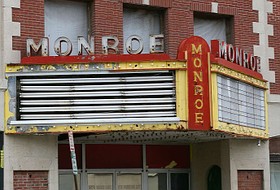