this direct route between Rochester and New York City covers only 332 miles of road. 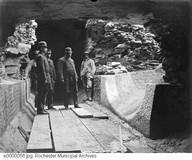 Sewers began in the city of Rochester without any central planning, our earliest being little more than ditches with flagstone sides and caps. Despite their primitive nature, they had a tremendous impact on our city's growth, as is the case with developing areas anywhere. Were waste to lie stagnant in cess pools along the yards of our early residents, the threat to their developing well water supplies and health would have been enormous. The early unplanned network of sewers serving our city discharged directly into the Genesee River, and this remained the case through the 1800s.

Though our city's previous residents had no way of knowing how primitive their system was, to say they were content would be a tremendous overstatement. As our city had no central water supply, a vital element was lacking from the early sewer system: no consistent flushing. Without rain water, the sewage lines would come to a hault and assault the senses and health of nearby residents. Though the Genesee River was a convenient blessing for waste disposal, even it was worthless to flush away and dilute waste during dry stretches1.

The 1870s marked the introduction of dramatically more sanitary systems2, but even these proved largely ineffective without central planning. The city's first major sewage development project, completed in 1890, was the creation of two large trunk sewers on the East side to gather waste from the old lines and bring it to the Genesee River. Though now such a development may seem trivial, it marked a major turning point. As the city gradually came round to accepting responsibility for direction of public services, expansion of the city was made possible. Territorial expansion of the city was made possible by demand for the expansion of its services to surrounding areas.

In many ways the establishment of independent sewage lines and public services was an act of defiance against the city. It is credited for the rise of the suburbs and the end of our city's territorial expansion in the 1920s. Our city's proportion of the total population of Monroe County peaked at 80% in 1925 and began a steady decline.

The effect of improved sewage lines within has been dramatic. Lands previously made all but uninhabitable have become prime real estate. Improved sanitation has saved countless lives.