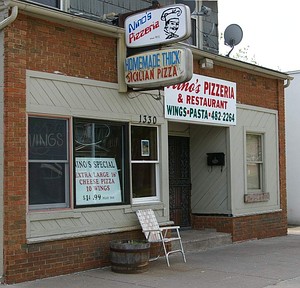 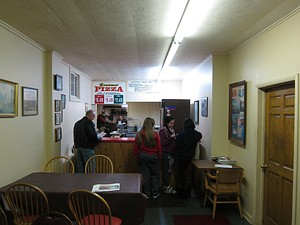 Nino's Pizzeria is a pizzeria in Culver-Merchants that has been serving Rochester gourmet pizza and focaccia for almost 40 years. They offer catering for corporate lunches. All major credit cards accepted.

2008-02-28 00:15:55   I am a Rochester native of many years, and I have tried many a pie. Nino's is THE best pizza in my opinion - and an unrecognized gem. Don't be cheap and order the coupon special, ask for gourmet sauce, sautÃ©ed portobello mushrooms, Locatelli cheese. C'mon, where are you going to find that in a pick-up pizzeria? Never fails to impress, and worth the drive. The owner is a fantastic guy with many a tale to tell, strike up a conversation and enjoy. —MantraSix

2008-04-07 18:58:14   By looking at this place from the outside you may be inclined to keep on driving, but if you get a pizza from Nino's you will have found a hidden secret in the city of Rochester. It is family run and been around for ever. There are lots of great pizza places in Rochester and they all have merit, but Nino's is my vote for best pizza in Rochester. Try it, you owe it to yourself... —RochesterNative

2008-05-29 20:51:59   Finally tried Nino's... and I am in love! The pizza is large, thick, and the crust is out of this world!!! Even great warmed up in the oven for the next day! I couldn't believe the selection of toppings... will definitely be coming back to try new combinations. I only wish they weren't so far away. By FAR the best pizza in Rochester! —jramey

2008-06-09 22:39:56   Best pizza in Rochester in my opinion. Owner and employees were so nice and friendly. I even enjoyed waiting for my pizza (did not call ahead, whoops) and having nice conversations with the other patrons. The white pizza here is out of this world. —KimBee

2008-06-10 11:38:55   Yes, you can eat in there. They have 3 long tables, picnic style tables. Since most people carry-out it's not an issue to find space inside. Also the owner will give you that nice lawn chair seen in the photo above if you want to sit outside. —KimBee

2009-05-27 01:05:55   the best "rochester style" pizza i've had (awesome wings as well). in my opinion blows mark's, salvatore's, and pontillo's out of the water, definitely doesn't get the love or recognition it deserves. a lot of my life-long-rochesterian friends in their mid-twenties aren't even aware it exists (or more accurately weren't aware until i enlightened them). highly recommend everyone give nino's a shot, doubt you'll be disappointed. —adamwright

2009-06-26 18:18:27   After reading the reviews here, I had to give the place a shot. I got a white pizza with mushrooms and it was beyond delicious. If I'm hankering for a pizza with a thicker crust than Pizza Stop/Joe's Brooklyn this would be my first choice. —BatGuano

2010-08-28 22:57:24   By far the best pizza in Rochester. Great staff. To be honest, I don't think they charge enough! I always give a large tip just because I never want to see them close. If you have not tried it yet, you are totally missing out! The best! —AndrewSimone

2011-02-05 We drove 50 miles through a snow storm on Saturday to try Nino's pizza and would do it again. It is some of the best pizza we have ever had including thin and other styles, all of which we like. After extensive delightful discussion with the owner, we took his recommendation and had the focaccia style pie. We tried three different ones (OK so we like pizza) and each was delicious. One of them was made the way he likes it, and by acclamation that was the best although the others were excellent as well. The crust was perfect. The toppings fresh and applied in the appropriate amount. Everything was great. The people are friendly. Our only regret was that we did not try Nino's sooner. We will make up for it. —RXScabin

2011-11-18 08:41:51   We had Nino's for the first time at the end of October with some friends who found it by chance. We have lived down the road for several years, but didn't know about this pizzeria. I liked the pizza a lot: tasty sauce (not sweet) and dry chewy crust. I'd order it again and probably will tonight! Maybe we'll try the focaccia style at the recommendation of RXCabin and BatGuano. —KatieSchmitz

2011-11-27 19:44:30   We've lived in the area for years, but this place has always been a little off the beaten path for us. Finally tried it last night and now we understand why everyone likes it so much. We have a new favorite pizza place. —DottieHoffmann