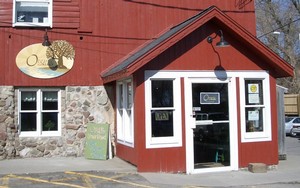 Organic Alley was a combination coffee shop, market and yoga studio featuring a selection of organic food and drink. Organic Alley also featured gifts and clothes. Was located in Schoen Place in Pittsford.


2006-05-25 14:04:21   I've been here to pick up a laptop lunchbox and ended up eating breakfast with my daughter. Everything is made on the spot. Their juices are freshly squeezed. The waffles and syrup I had were amazing. The owner and staff were very nice. —JasonWilder

2006-09-14 06:20:20   I've taken yoga w/ the instructor/co-owner on one of his previous gigs and found him to be 'calming' both in and out of the studio. Useless tidbit: my girlfriends/fellow yoga students have a crush on him. RE the cafe, been a few times for drinks. Generally friendly staff - do they seem to change frequently? I've come to be a bit vigilant though since they have on occasion only partially sealed the drink lids (beet juice is dangerous). —ChristineLeo

2006-09-27 12:11:07   This is one of my absolute favorite places to eat and do yoga. I absolutely love their "made from scratch" wraps!!! Everyone is so nice that works there. It really is a diamond in the rough....and yes the co-owner/yoga instructor is very calming and nice. I recommend this place to everyone i know! Check it out! —PittsfordGal