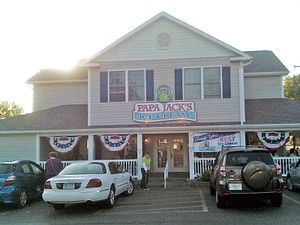 Papa Jack's Grill was a diner on Route 96 in Victor. They also served ice cream in a building next door and only accepted cash payment, though there is an ATM available. in 2019, the owners sold the diner and the business became a Mac's Philly Steaks diner. The Ice cream will remain under the Papa Jack's name.


2008-07-07 15:30:48   Our department at work got take-out from here today. While I got a salad which is hard to screw up, I asked fellow co-workers to share their thoughts on their lunches.
One co-worker wrote:
"The hot turkey, meatloaf and hamburg sandwiches are an epicurean event of major proportions for gravy-loving carnivores who feel that thereâs really just too much free space in their arteries anyway." Yes he went over the top when I asked for a one line commentary, but in essence, he was taken by their gravy.
Another co-worker said:
"Their hot sauce on their hamburger was brilliant, and I could taste a hint of cinnamon".

Give it a shot if you happen to be in Victor for some untold reason. —TippingPoint