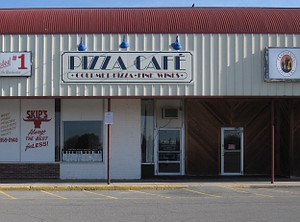 Pizza Cafe was a pizzeria in Suburban Plaza Over 40 gourmet pizzas available for sampling every night but Monday, from 6 to 9PM. Great wine selection, local beers, etc.

2007-02-04 18:29:17   I've gone here many times with friends to get the pizza sampler. In my opinion it is best in a group. I've also never had anything on their normal menu, so I can't comment on that, but the pizza sampler is fun and interesting. —IsaacVanDuyn

2007-05-24 21:24:02   Great pizza, but I also thought it was way overpriced. I'd expect (and accept) a bit higher than average for a place like this, but this was a bit too much. The sampler seems like a fun idea, though. —RachelBlumenthal

2007-10-17 19:42:46   Used to be a favorite for pizza but the website is down and the phone is disconnected. Looks like we lost them but haven't confirmed with my own eyes. —AdamGrossman

2007-10-18 13:56:03   Yes, Pizza Cafe closed sometime in June, I think. I happened to be there on their last day. We overheard the server telling the table next to us. We went by the next weekend and saw a letter up saying they were closed, thanks for all the years of patronage. There was also a phone number listed where they would answer any questions.

I really liked the food there. —MarcVera