The Rochester Cannabis Coalition, or RCC, was an activist group made up of citizens who advocated an end to the US War on Drugs. RCC was an affiliate of the National Organization for the Reform of Marijuana Laws ( 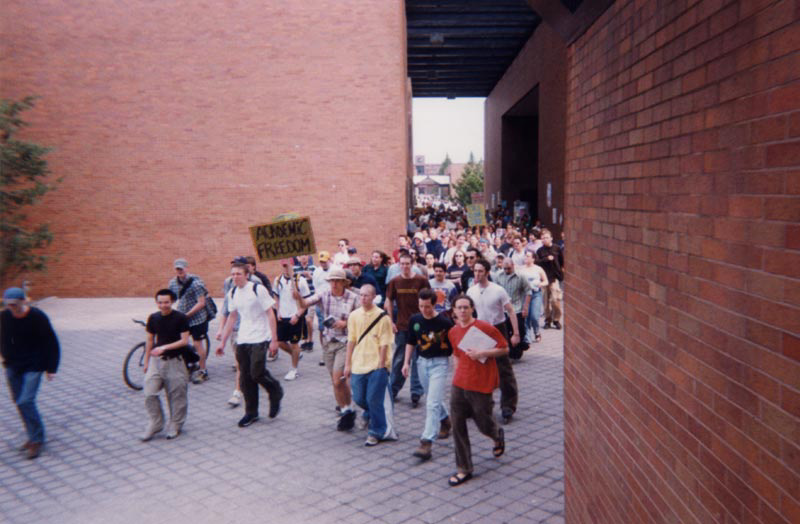 RIT Students Rally in Support of Shea Gunther, May 1998

Rochester Cannabis Coalition originated in 1997 as an unofficial, campus-based, student organization at Rochester Institute of Technology. In 1998, the organization was approved by the student government to become an official campus-based organization, eligible for institute funding pending approval by RIT. Then RIT President Al Simone pulled the application for 'administrative review', and held up the process for over two months. Finally, he announced his decision that he was overriding the student government and denying the club's application, on the grounds that such a group would make the campus more attractive to drug dealers.

This set off a storm of protest from the members of the RCC. A petition drive was organized, and over 1,000 signatures were collected calling for Simone to overturn his decision. By denying the RCC's application, the issue drew more attention than it may have otherwise. Local news covered the event, stories were written in the Rochester newspaper, and the campus press covered it weekly through the 1997-98 term.

Attempts to Appeal to Higher Administration

Three weeks before the end of the 1998 school year, RCC President and Founder Shea Gunther was on campus when he saw Simone's Special Assistant, Barry Culhane and decided to follow him. He ended up in the CIMS (now Louise Slaughter) Building, an academic building that also happened to house the meeting of the Board of Trustees. Upon making visual contact with Gunther, Culhane called Campus Safety.

He was actually trailed by a much shorter officer, who was soon lost to Shea's fast and long strides. With nothing else to do after losing him, Shea went to the second floor. He was leaning up against a railing when he was surrounded by at least six officers. They got belligerent with him and began to jostle Shea. One of them counted down to three, and they all jumped him. He didn't go down right away, resisting with everything he could, but soon found himself face down on the floor with a knee in his neck and his wrist cocked very painfully. He was dragged from the building, processed, served with a formal arrest warrant on top of his school charges, and driven to the edge of campus.

With no place to go, having lived in campus apartments, Shea spent the next three weeks sleeping on couches, arranging for his defense in both county and school court, and trying to not flunk out while not being allowed to go to class.

On the day of his school hearing, a crowd of students held a rally outside the President's Office, going as far as to storm the office, only to have Simone step into the elevator for a very uncomfortable ride down with 15 angry student protesters.

Shea was found guilty of resisting arrest and assaulting a campus safety officer and suspended for a year. His suspension was later doubled to two years as he was failed most of his classes for the semester. He now lives in Boulder, Colorado with his wife and two children and works as an entrepreneur.

The Fall of 1998 brought big changes to the RCC as a core of members took over operations, led by President Chris Maj. A few weeks into the new school year, Mike Eck came up with a new name, Students for Sensible Drug Policy and a new direction of focusing on the War on Drugs as a whole. Former RCC Treasurer Kris Lotlikar was also forced out of RIT and headed to Washington, DC. There, Lotlikar interned for the Drug Reform Coordination Network and became their Director of Student Activism before taking the concept of Students for Sensible Drug Policy national.

SSDP has become one of the largest student lobbying organizations and has thousands of members and hundreds of chapters across the nation.