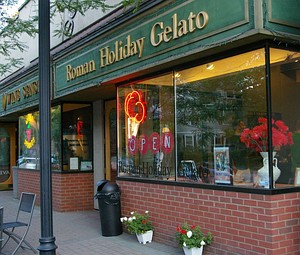 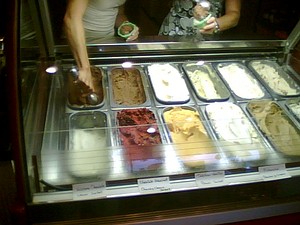 Roman Holiday was a gelato store on Park Avenue located next door to Wine Sense and owned by the folks from Cibon.


2008-08-02 19:00:31   Nice neighborhood shop with 12 flavors of gelato. The owner was behind the counter when we went - she is very nice, and put a 'large' amount of gelato in a 'small' cup. As for the gelato itself, I thought the chocolate had the best taste, and the most dense and smooth texture. —ZachSmalt

2008-08-05 16:41:01   I went here this past weekend with my mom and dad and was a disappointed in the size vrs the price along with the texture. A small is 3.50 a large 5.50. Mom got a small and dad a large... there wasn't much difference in the amount they each got, so don't bother getting a large. The pistachio gelato was very flavorful but it along with the triple espresso had more of an ice cream texture than gelato which was really disappointing... I was really looking forward to having a gelato place in town... too bad it tastes like ice cream and not gelato. —StephChows

2008-09-08 16:33:27   I am not really a gelato fan, but this wasnt bad. I tried hazlenut, it was good, but not amazing. The servings were plentiful and the girl I was with really liked the Roman Holiday movie motif. —MrRochester

2008-09-16 14:21:19   I was really excited to see this open within walking distance from my apartment. I got the white pistachio gelato and I had a hard time keeping others from wanting bites of it. I think they have a decent and varied selection and you get a fair amount of gelato with the small size. —MaryaKaszubinski

2008-10-09 20:39:28   A great addition to Park ave. The gelato is light and rich all at once. I have tried hazelnut, chocolate and cappuccino - they were all very good. You can get half scoops on the small size so..try a couple of different types. I must say it is kind of pricey though - $3.75 for a small scoop. —OneLove

2009-05-20 14:51:00   Cute shop and very friendly owner. The gelato, while not as good as what you would find in Italy, is quite tasty. The chocolate and hazelnut flavors are both very nice, and I also recommend the toppings available. A fun place for a date or after dinner on Park Ave. —OxfordWriter

2009-06-10 16:20:44   The man who was behind the counter was very friendly and helpful. I wasn't able to immediately decide which flavor I wanted, so he supplied his personal suggestions as well as samples of the few I was interested it. Ultimately, I went for the Peanut Butter, which was incredibly smooth and tasted like I was eating a slice of peanut butter pie. I would absolutely recommend it. —MerCDotes

2009-07-05 19:23:20   I tried this place today and was sadly disappointed. First of all, they don't take cards... but I didn't know this until after I'd already ordered and they'd served up the gelato. So I had to run down the street and spend $3 at the ATM, which brought my total to $13 for two small portions. The "large" size would be a small anywhere else. The flavors we tried, pistachio and a chocolate-vanilla, were decent but nothing spectacular. My husband's pistachio also had an unexpected traveler in the dish: a long, black hair. It was buried deep within the gelato and definitely wasn't my husband's (he's blond with short hair). When I went back in to let them know that the pistachio had hair in it, the cashier was nice and did give us the pistachio for free (not the chocolate-vanilla, though). I probably won't be coming back. The employees in the shop seemed kindly, but the product itself was only fair and the hair in the gelato inexcusable. The lack of ATM is a pain, too. So we won't be returning. —MariahBetz

2010-08-14 17:33:03   I've really enjoyed the gelato here in the past, but recently it seems to have dipped slightly in quality. The flavors I tried last time I went were far too sweet and there was something a touch off about the consistency—maybe the case wasn't as cold as it should have been that day? I'll definitely try again, as I've loved it in the past, but the last time was a real bummer. —AliMcGhee