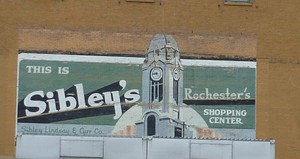 Sign still visible on the back of the Sibley Building. Sibley's, (originally Sibley, Lindsay & Curr) was a department store in downtown across from Midtown Plaza and another mainstay with McCurdy's in its heyday.

Sibley's first major store, with a 25 foot frontage, was marked as 1868 and grew into an enormous complex - "The Sibley Building".